by Lawrence “Lonnie” Brennan
BOSTON – For more than a year, lesbian Democrat Massachusetts Attorney General Maura Healey has been pressing for the Legislature to pass a bill that will allow men into women’s shower rooms and locker rooms and bathrooms, and had a message to all those women who don’t want a male in their bathroom: “to them I say, if you have that much of a problem, hold it.”
“Who, the hell, does she think she is, telling ME to hold it?” WRKO radio talk show executive producer Brittany Jennings replied. “Who does she think she is? She’s a bully. And honestly, everyone should call her and tell her how disgusting she is with what she said. Disgusting.” 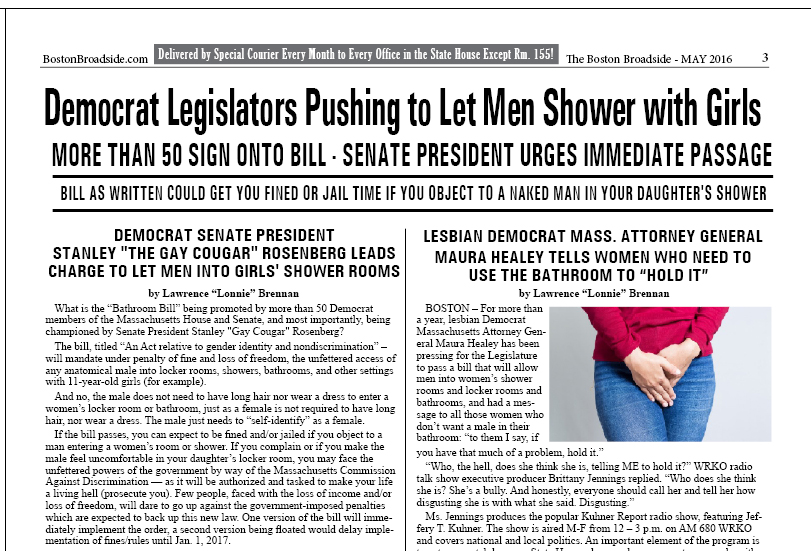 Ms. Jennings produces the popular Kuhner Report radio show, featuring Jeffery T. Kuhner. The show is aired M-F from 12 – 3 p.m. on AM 680 WRKO and covers national and local politics. An important element of the program is to act as a watchdog over State House abuse and government overreach, with a mix of male and female callers of seemingly all ages and national origins making up what host Kuhner calls “the best audience in the business.” The show has rapidly expanded over the past year through online streaming, bringing in callers from many cities and towns across the United States.

“Listen to her unbelievably condescending answer,” Jeff Kuhner stated as he played the attorney general’s taped response. A state panel had asked Healey about the bill which the “out and proud” lesbian has been promoting along with Democrat Senate President Stanley “Gay Cougar” Rosenberg (see related story).

“She’s the state’s attorney general. Her job is to protect the citizens of all of Massachusetts – all of us,” Kuhner explained. “And she’s now telling the women – our mothers and daughters of this state – well, you don’t want to shower with a guy beside you naked? – well, too bad, go home and shower.” “[She’s telling them] you know what, you got to go to the bathroom and there’s some guy hanging around with his genitals, forgive me, his schlong hanging out? Too bad. Hold it.”
“Wait,” Kuhner exclaimed, “are you freaking kidding me?”

Kuhner Corner: Did Baker Steal from the MassGOP?

We bring your attention to a new posting online byJeff Kuhner “Boston’s Bulldozer” WRKO 680 AM Boston REPRINTED BELOW with link to the Kuhner Report at www.wrko.com Kuhner’s Corner: Did Read More…