by Lawrence “Lonnie” Brennan
What is the “Bathroom Bill” being promoted by more than 50 Democrat members of the Massachusetts House and Senate, and most importantly, being championed by Senate President Stanley “Gay Cougar” Rosenberg? 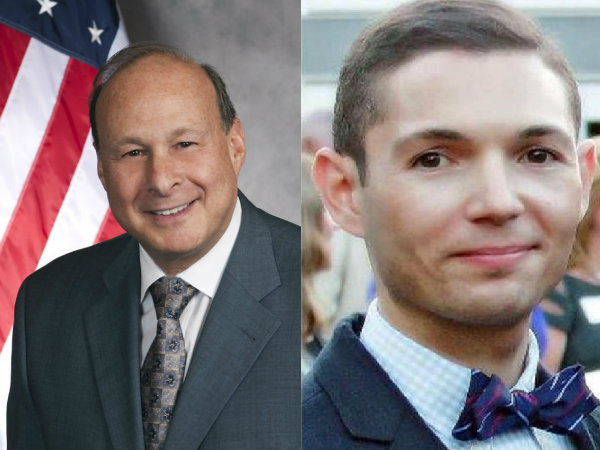 The bill, titled “An Act relative to gender identity and nondiscrimination” – will mandate under penalty of fine and loss of freedom, the unfettered access of any anatomical male into locker rooms, showers, bathrooms, and other settings with 11-year-old girls (for example).
And no, the male does not need to have long hair nor wear a dress to enter a women’s locker room or bathroom, just as a female is not required to have long hair, nor wear a dress. The male just needs to “self-identify” as a female.
If the bill passes, you can expect to be fined and/or jailed if you object to a man entering a women’s room or shower. If you complain or if you make the male feel uncomfortable in your daughter’s locker room, you may face the unfettered powers of the government by way of the Massachusetts Commission Against Discrimination — as it will be authorized and tasked to make your life a living hell (prosecute you). Few people, faced with the loss of income and/or loss of freedom, will dare to go up against the government-imposed penalties which are expected to back up this new law. One version of the bill will immediately implement the order, a second version being floated would delay implementation of fines/rules until Jan. 1, 2017.
To date, there is no compromise to language which would respect the choice of a transgendered person to enter a women’s room or men’s room, while also protecting the privacy rights of a 9-year-old girl. Currently, a spectrum of transgenders have stated that they feel uncomfortable after having chosen to “present as the opposite sex,” to have to enter the locker room at their gym, or toilet at a bar or restaurant, of their own “birth” gender.
President Stanley “Gay Cougar” Rosenberg (who in his mid-sixties announced he was planning to marry a twenty-something-year-old former State House male page, also a former employee of his), has personally taken up the charge to push this bill.
Rosenberg held a forum to support the bill, has taken to newspaper, radio, and nearly any media that will have him, to try to convince people that this is a civil rights issue. With a mostly liberal State Senate, with more than one gay member (in closet and out of closet) doing the voting, Rosenberg says he has high support amongst his colleagues to pass the bill.
The bill will sanctify, codify, encourage, and defend the right of any male to walk into any women’s locker room (YMCA, Work Out World, Boston Sports, Latitude, Gold’s Gym, Lincoln High School, Revere High School, Swampscott High School, Danvers High School), and every other bathroom and locker room.
The question repeatedly asked is: do you want teenage boys going into the girls’ locker rooms? Remember, you only need to “identify” as a female. You don’t need to have long hair, do your nails, nor wear a dress. Many women have short hair; many seldom wear dresses. You just need to identify as a female. Ditto for a woman who wants to enter a boy’s room.
This is not a clear-cut issue as proponents for and against the bill have noted. On one side you have the privacy rights of males, females, and children to consider. On the other side you have the concerns expressed when a male may have gone the route of Bruce Jenner, for example, to change his outward appearance. Would you force Bruce to walk into a men’s room if he looks like a female? Is that fair to Bruce?
Or what about when Mr. Jenner first started his outward transgender process? He didn’t have all the surgery and chemicals in him and looked 95% male and only 5% female, but he identified female. So if he walked into the showers at the YWCA, would that be OK? And even though he has male parts, and male DNA, he has chosen to be called a she. Is that choice enough to force the weight of the government to allow him, or any man into your granddaughter’s bathroom or locker room? Is that choice enough to impose a fine upon you if you fail to call Mr. Jenner “she” as he requests?
Currently, some argue, an individual business is free to make its own rules. For example, Target has proclaimed that its stores now welcome any gender into any bathroom. That is its choice as a business. It is not forced by government, and anyone shopping there can make the choice to shop there or not shop there.
But if the government adopts the proposed bill, you will have no choice. You will be unable to object or express any concern if a 45-year-old male walks into the YWCA shower room with you and your daughters. Indeed, your objections could be seen as a hate crime of discrimination, and your life could enter a well of hurt (lawyers, government fines, possible jail time, for your discriminatory actions (see section 5 of the bill, “The Massachusetts Commission Against Discrimination, established by section fifty-six of chapter six, is authorized to adopt, promulgate, amend, and rescind rules and regulations or to formulate policies and make recommendations to effectuate the purposes of this Act.”).  Rosenberg has repeatedly stated that it is a civil rights issue that all women should be granted access to all men’s facilities, and all men should be granted access to all women’s facilities. Age is also irrelevant.
So, does this bill help transgender individuals the way some believe it will? Or does it open up privacy problems for children?
If you have an opinion on this bill, time is short. Speak up now. Once adopted, this law will have teeth to it, and you must remain silent on the issue forever, or risk your finances and your freedom if you speak out.

By Jeffrey T. Kuhner Massachusetts Gov. Charlie Baker is joining the transgender revolution. The liberal Republican has said he will sign the “transgender rights” bill pushed by leftist Democrats in Read More…