FROM OUR APRIL 2019 PRINTED EDITION

In a 469-page detailed legal complaint, a group of Newton taxpayers have filed a lawsuit against “the Newton School Committee, Superintendent of Schools David Fleishman, the principals of the Newton high schools, and certain high school history teachers to compel them to stop discriminating against and indoctrinating students with anti-Semitism, bigotry against Israel, and Islamist religious dogma as part of the high school history curriculum.”

Most pointedly, the complaint specifically provides examples of multiple documents used to present distorted propaganda to impressionable students. The complaint also includes e-mails the residents have obtained which show a clear attempt on the part of certain school employees to deceive the public.

In a press release issued after the filing of the lawsuit, the taxpayers claim that “Newton Public Schools has deliberately failed and refused to comply with the Equal Rights Amendment of the Massachusetts Constitution, with the Massachusetts Student Anti-Discrimination Act, and with civil rights regulations that require schools, through their curricula, to encourage respect for the human and civil rights of all individuals regardless of race, identity, religion, color, sex, and national origin.”

The group reiterates their charge that the school administration is shielding certain teachers and allowing factually-flawed teaching, citing how “Newton teachers teach that the Jews and Christians deliberately forged their holy texts to contradict the Muslim Quran that Zionism has ‘little connection’ to Jewish history in ‘Palestine’; that the Jews took advantage of the Holocaust to gain sympathy for Zionism at the expense of the ‘Arab plight’; and that the Israelis treat the Palestinians like the Nazis treated the Jews.”

“After being taught all this, under the guise of ‘critical thinking,’ students are asked to debate whether there should be a one or two-state solution to the Arab-Israeli conflict,” the group noted. The schools have repeatedly stonewalled residents seeking information on distorted teachings, and when caught red-handed distributing biased materials, have attempted to shield themselves from any criticism, stating that they are teaching students critical thinking – a way to think critically about submitted materials and decide for themselves. Residents have repeatedly petitioned the school committee to notify students when they are being fed biased propaganda.

“Despite significant community concerns, scholarly documentation of anti-Jewish bias, and formal citizen requests for remedial action, Defendants have categorically and repeatedly refused to remedy the teaching of false and hateful stereotypes about Israel, Israelis, and the Jewish people,” the residents note. “They have also repeatedly refused to even read the studies of the curriculum presented to them. Instead, they have issued public statements that the taxpayers are engaging in scare tactics and that their claims are baseless.”

Members of the School Committee, most notably the Chair Ruth Goldman, have repeatedly lashed back at Newton residents and Jewish community organizations who have expressed concerns about the curriculum. Any group who has expressed any potential criticism of the schools has been labeled a “hate group” with a “hateful agenda.” 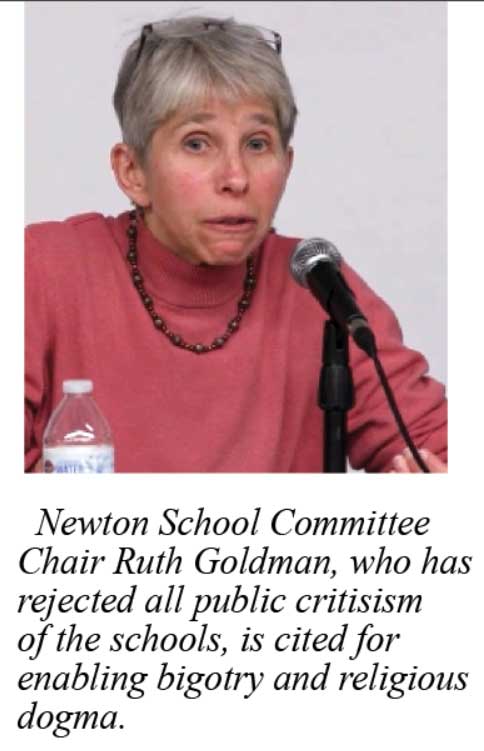 Indeed, at a forum held in December of last year (a forum was finally forced upon the School Committee in response to an anti-defamation claim), members of the committee, instead of discussing any concerns or specific items, not only refused to review any evidence, but went out of their way, taking turns admonishing anyone who expressed concerns with the schools. 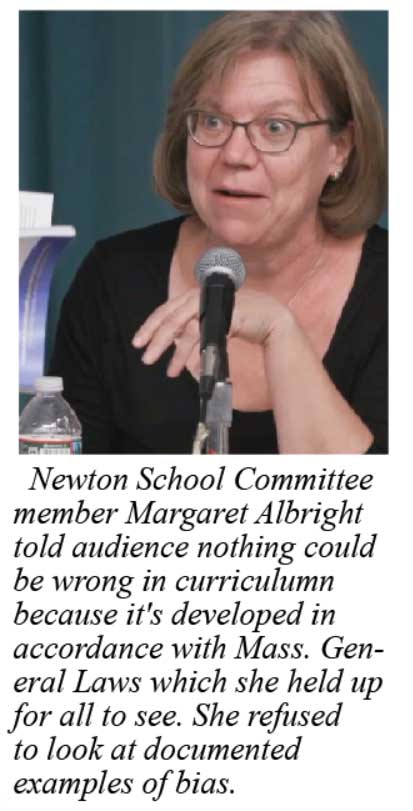 Mayor Ruthanne Fuller was particularly caustic in her criticism of those who forced the meeting. She joined members of the school committee who spent more than an hour chastising opponents, but never once did any of them address the specific concerns of the residents. In short: Shoot the messenger, ignore/obscure the message.

In late fall of 2018, the School Committee voted unanimously not to grant a formal citizen petition request asking that the schools review certain teaching materials and initiate a policy of transparency so that parents and the public will know what the students are being taught. The committee repeated its vote again in December. At that meeting, Chair Goldberg termed transparency a “slippery slope,” and something she would not want to allow people to do, as you never know what will happen with parents and taxpayers seeing and then questioning the materials.

Karen Hurvitz, attorney for the taxpayers, stated that “her clients are not asking for any money damages, even though Defendants have certainly caused years of incalculable damage by their insistence on teaching impressionable students materials that slander Israel and Jews. The taxpayers here are merely asking Newton public schools to perform their duties and obey the law, which requires that their curriculum encourage respect for all people.” She concluded that “education should be based on fact, not on stereotypes and propaganda.” ¨