FROM OUR AUGUST 2018 PRINTED EDITION

Boston Broadside Highlights Over $700 Million in
FY2018 Budget Amendment Spending on Questionable,
Unnecessary and Superfluous items, Driving Up the
Cost of Government to All Massachusetts Taxpayers

Some of the more notorious members of the $700 million spending club: 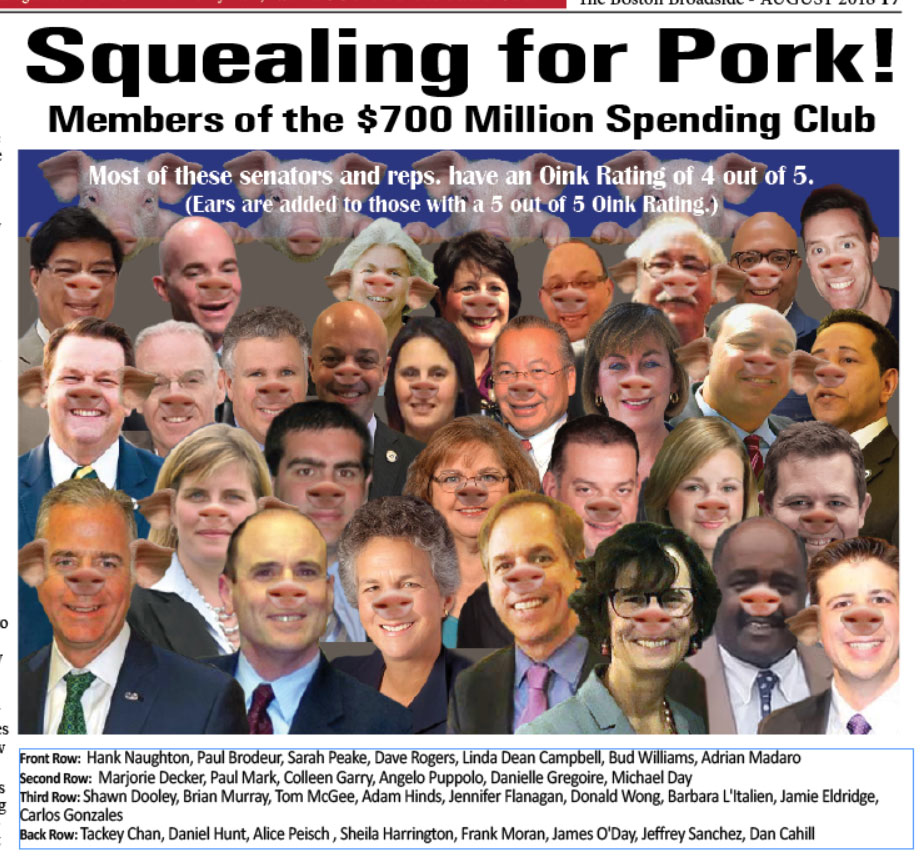 In this final Part 13 of our analysis of the 1210 House amendments to the FY2018 budget, we have detailed how the elected members of the Massachusetts House show little regard to controlling spending and treat money as if it comes from some unknown source without an economic reckoning.

The year-long spotlight series by the Broadside shows a system that operates on the principle: “You vote for my gazebo and I’ll vote for your gazebo.” In other words, in their club they all stick together and all spending gets approved no matter how ridiculous or outrageous the request might be. We even pointed out a budget amendment request by Rep. Colleen Garry of Dracut of “not less than $25,000 to construct a Gazebo in Dracut.” It was, of course, approved without debate and by voice vote.

If you are new to our paper, the questionable or unnecessary amendments noted here and in previous installments fall mainly into two categories. First is money on projects to favor relations within a representative’s district. This could be for a local parade or celebration, something for the senior center, a police station carport, a new water main, fixing up a park, help for the town’s “economic development,” and so forth. A favorite seems to be new radios or communication equipment for the police and/or fire departments. All of these things, of course, should logically be funded by the city or town within the rep’s district. But, hey, if you can get somebody else to pay for it like the state, while helping your reelection effort, why not go for it? Particularly if you know it’s virtually guaranteed to be approved by the Massachusetts “good-old-boy” and “good-old-gal” Beacon Hill system.

The second category regarding amendment spending is simply adding money to an existing line item in the House Ways and Means Budget or by adding a new program. The Ways and Means Committee puts together a bipartisan budget which it feels will adequately fund the state’s programs and agencies for the coming year. However, if the state reps feel more money should be spent on any part of the budget, or a new program, they simply file an amendment to add any amount of your money they feel would be nice. In the current listing, that’s what Rep. James O’Day (D-West Boylston) did when he decided to add $8,756,792 to the $250,000,000+ that was already set aside to fund the state’s university system. He just felt that this wasn’t enough. O’Day (D-West Boylston) also threw in another amendment for an additional $4,700,000 as pay raises for early educators. Hey, what’s a few million here or there.

So you see the problem. And it gets worse when it comes to heart-tugging items like special education or medical issues. You can always argue that more money is never enough for special needs students or research on Alzheimer’s, and once an amount is proposed it’s political suicide to scale back any dollars requested. Not to mention that many of these programs have well-organized and well-funded organizations or groups that will show up in your office and campaign against you if you try to cut their funding.

The process for how all these amendments get approved gets an “F” grade for accountability and transparency. The speaker takes the hundreds and hundreds of amendments that he determines are qualified to go forward (almost all the spending amendments are mysteriously qualified) and bundles them into a handful of categories such as Housing, Judicial, Public Health, Public Safety, Education, Elder Affairs, etc., which are then labeled Consolidated A, Consolidated B, Consolidated C, and so forth. These consolidated amendments are each subsequently brought before the entire House and without debate or discussion voted in an up or down voice vote in one afternoon. With no surprise, they all pass.

Of the 160 members of the House, we could find very few who did not submit amendments to the budget which did not ask for money for a local project or to increase funding for some new or existing line item in the budget. The first name that jumped out at us was Speaker Robert DeLeo (D-Winthrop). We don’t know if his abstention was altruistic or by tradition because of his position, but it was welcome. The others who asked for nothing from the budget were Representative Geoff Diehl (R-Whitman), Representative Stephen Kulik (D-Worthington) and Representative John H. Rogers (D-Norwood).

We salute these three representatives for their restraint in watching out for the taxpayers of the commonwealth.

The 1210 amendments submitted to the FY2018 budget has grown to 1400 amendments in the current FY2019 fiscal year. We don’t know how you eventually get a handle on the problem. Do we have to wait until Massachusetts becomes ungovernable like California? Or even Venezuela?

Just a note to ponder. In New Hampshire the two-year budget is somewhat less than $12 billion and during the budget deliberation process only about 25 to 30 amendments are proposed to tweak the budget. Could this have something to do with why so many Massachusetts residents have fled, er, moved to New Hampshire?

Other amendments that deal with obvious state issues like regional (non-school) transportation, general education, multi-district concerns and administrative actions have generally been left out unless they add money to the Ways and Means line item already in the budget.

If you would like to review all 1210 House amendments in detail, go to https://malegislature.gov/Budget/FY2018/HouseDebate and just click on each amendment number.  ♦