The Taking of Anna 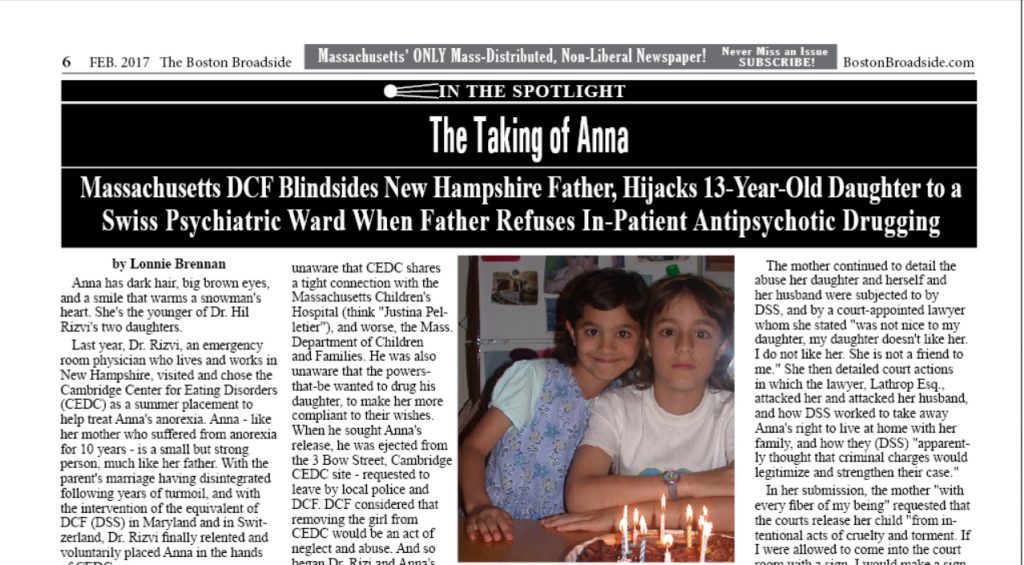 Last year, Dr. Rizvi, an emergency room physician who lives and works in New Hampshire, visited and chose the Cambridge Center for Eating Disorders (CEDC) as a summer placement to help treat Anna’s anorexia. Anna – like her mother who suffered from anorexia for 10 years – is a small but strong person, much like her father. With the parent’s marriage having disintegrated following years of turmoil, and with the intervention of the equivalent of DCF (DSS) in Maryland and in Switzerland, Dr. Rizvi finally relented and voluntarily placed Anna in the hands of CEDC.

It was one of the biggest mistakes of his life.

While initially proceeding fine at the CEDC, after eight weeks Anna’s condition reversed and went downhill from there. Dr. Rizvi questioned repeatedly the care being given to his daughter, especially the use of a 10 mg (a high dosage) medication of the powerful antipsychotic Zyprexa against his will. Finally, when his complaints rose to protests he made the decision to remove his daughter from the Cambridge facility and return her to New Hampshire where he would seek other treatment and prepare Anna to re-enter school in the fall of 2016.

Dr. Rizvi was unaware that CEDC shares a tight connection with the Massachusetts Children’s Hospital (think “Justina Pelletier”), and worse, the Mass. Department of Children and Families. He was also unaware that the powers-that-be wanted to drug his daughter, to make her more compliant to their wishes. When he sought Anna’s release, he was ejected from the 3 Bow Street, Cambridge CEDC site – requested to leave by local police and DCF. DCF considered that removing the girl from CEDC would be an act of neglect and abuse. And so began Dr. Rizi and Anna’s third living nightmare. 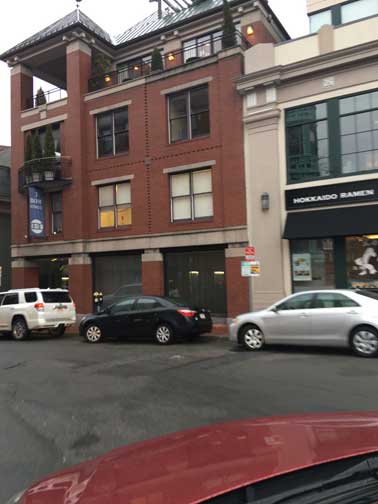 Similar actions had happened years ago in Maryland, when Anna was taken from her mother and father in 2014 – because of her anorexia – and it took a gargantuan effort to get her released. In the process, Anna diminished, and the family unit disintegrated. Dr. Rizvi was accused of child abuse and neglect, and was told that only the state could take care of his daughter. His wife, Teresa, wrote an affidavit and demand for his exoneration, defending her husband. Charges were eventually dropped (pinching the child’s arm) and Anna was released, but the months of DSS, court actions, treatment, doctors, threat of placing Anna in a foster home with a big dog (Anna was afraid of big dogs), and turmoil drained and dismantled the family.

During that first nightmare, Mrs. Rizvi submitted an Interlocutory Motion in the Spirit of Habeas Corpus (Circuit Court, Allegany County Case Number 1-14-12396) to get her daughter released. Through her attorney, she wrote in part:

“2. I am woman of above average intelligence. I am a competent person and a trained allied health professional. I have long detailed experience in the complications, mentally and physically, of anorexia.

3. I know my two daughters intimately. I have been with them since they were born. I know about their sickness, their personalities, their strengths, and their weaknesses.

4. My girls know me and trust me. They have been in a sick, and somewhat rebellious mode, but they know that I would never do, OR ALLOW anything to hurt them.

5. While my husband and I have been slandered and maligned, I/We love our children infinitely much. We have done our best to take care of these children in every way. Opinion may vary, but I am stating that neither I nor my husband would ever let any harm come to our babies.

6. Since early February, my family has been in a complete uproar because of the misdirected acts of the Allegany DSS. My family does not agree that the actions of DSS are honest or intended in the best interest of the children. We believe that they abuse their great power. We believe that we are the victims here.

6.A. The fact remains that my daughter Anna has not been allowed to come back to her family home. Anna is an American citizen. She has a right to come to her home.”

The mother continued to detail the abuse her daughter and herself and her husband were subjected to by DSS, and by a court-appointed lawyer whom she stated “was not nice to my daughter, my daughter doesn’t like her. I do not like her. She is not a friend to me.” She then detailed court actions in which the lawyer, Lathrop Esq., attacked her and attacked her husband, and how DSS worked to take away Anna’s right to live at home with her family, and how they (DSS) “apparently thought that criminal charges would legitimize and strengthen their case.”

In her submission, the mother “with every fiber of my being” requested that the courts release her child “from intentional acts of cruelty and torment. If I were allowed to come into the court room with a sign, I would make a sign that said Let My Baby Go.”

In Section 13, she wrote, in part, “the county has tried to take away my right to have a complete family, and Anna’s right to live at home with her family. They have conspired to place criminal charges on my wonderful beloved husband….”

She wrote how any perceived medical emergency was over, and that “it is now time to allow the child to recover emotionally with her family. I fail to see why the Court and DSS do not see that as a priority for a lonely, sad child to be allowed to go home with her mother and her sister. If the Court had a heart, the Court would immediately send the child home, absent a compelling reason why the child could not come home.”

As she wrote, the Rizvi family did not receive due process in the Juvenile Court of Allegany County, and were tricked into not giving defensive testimony. Her husband was not allowed to testify.

Eventually, Anna was released and the charges against her father were dismissed (accused of pinching the girl on the arm).

Dr. Rizvi moved to New Hampshire and his wife moved with the girls to Switzerland where the mother shares dual citizenship. But the DSS/DCF reach is long, and soon both girls were pressed into psych wards as the Swiss DCF equivalent was notified and pressed to secure both girls into its care.

During this traumatic time, the girls were treated at Kinderspitaal (kispi) and Clienia-Littenheid. Dr. Rizvi termed their placements as horrific. While there, his older daughter attempted to commit suicide and Anna attempted to escape/run away. As punishment, Anna was subject to a “lockdown room for four weeks,” the father related. “The room is about the size of a king-size bed. You would not believe it. And she was cold. Constantly cold.”

He said Anna was treated like “untermenschen” (sub-human) and told to contemplate life without her parents, and in a foster home.

She became even more restless, and Dr. Rizvi stated that it took him 15 trips back and forth to finally get Anna released from her second taking by government agents.

And for a while, at school in New Hampshire’s Burnam Brook School, she flourished.

But the school year ended, the demand and legal pressures from DCF officials (and equivalent) on two continents continued to hound the family, and set up the third taking of the dark haired girl with the big smile and the big brown eyes that could melt a snowman. ¨

Watch for more of Anna’s struggle in our March edition.

The 2017 March for Life was enormous. Thought we would add a link to one of the movies showing the crowd:

Our 50th Monthly Edition was received by most subscribers earlier this week (first-class). It’s been rolling out in stores with limited distribution of the 12,000+ copies we distribute around the Read More…

Republicans “Led” by Kirsten Hughes Fail to Field a Candidate, Again Another election, another chance for the Massachusetts Republican Party (led by Kirsten “Marrionette” Hughes) to once again not even Read More…

One Reply to “DCF: The Taking of Anna”