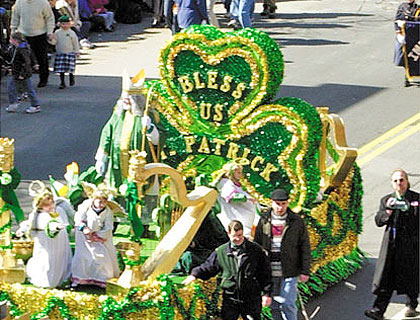 AFTER THREATS OF VIOLENCE

Mass Resistance and the Catholic Action League of Massachusetts have received multiple reports from within the Allied War Veterans Council—organizers of Boston’s Saint Patrick’s Day Parade—that the homosexual group OUTVETS was admitted to the 2017 parade only after numerous threats of violent protests disrupting the parade, potentially causing injuries and worse, were directed at Council members

Reports were also received that the Boston Police found these threats to be credible, and told Council members that they could not

guarantee that they could contain the potential violence or maintain a secure perimeter around the parade route. According to sources,

the Boston Police also told parade organizers that if they went forward with the parade without OUTVETS, the Council would be

responsible for the ensuing violence. The police also suggested that the parade might have to be cancelled for public safety reasons.

If these reports are accurate, this is the second time in three years that the City of Boston has threatened to cancel the parade, as it was revealed in recent court filings that Mayor Marty Walsh threatened to withdraw the parade permit if homosexual groups were not allowed

who supported the election of Marty Walsh as mayor.”

they would be investigated by the FBI for everything from federal hate crimes to domestic terrorism. I have, personally, spoken to three current and former officials of the Allied War Veterans Council who have corroborated these allegations. The U. S. Attorney’s office

needs to investigate these reports to determine if the civil and constitutional rights of parade organizers were violated.”

Catholic Action League Executive Director C. J. Doyle made the following comment: “This is sheer thuggery by the Walsh

Administration. A nine to zero United States Supreme Court decision has been, effectively, nullified by a city government engaging in unlawful threats, bullying, intimidation, ruthless pressure tactics, and the use of law enforcement to coerce citizens into forfeiting their constitutional rights. One of the most disturbing aspects of this controversy is that the leadership of the Boston Police now seem invested

in implementing the political agenda of the Walsh Administration. Does the rule of law still apply? Boston used to be called ‘The Cradle

of Liberty.’ Now, it resembles a banana republic, with a Peronist mayor.”

Interfering with the exercise of constitutional rights is a crime in Massachusetts (MGL Chapter 265, Section 37), and since 1991, has been

PARADE ORGANIZERS FOR DEFENDING THE

In a statement released this afternoon, the Veterans Council said: “Since its founding in 1901, the Parade has been a celebration of country, community, and the Catholic Faith. The question at hand is not one of inclusion or discrimination. The Council is accepting of all peoples and organizations, but will not permit messages that conflict with the overall theme of the Parade.”

The statement was issued in response to the firestorm of controversy which followed the Council’s decision to prevent the homosexual group OUTVETS from marching in the 2017 parade.

The Catechism of the Catholic Church, promulgated by Pope Saint John Paul II in 1992, states: “Basing itself on Sacred Scripture, which presents homosexual acts as acts of grave depravity, tradition has always declared that ‘homosexual acts are intrinsically disordered.’ They are contrary to the natural law. They close the sexual act to the gift of life. They do not proceed from a genuine affective and sexual complementarity. Under no circumstances can they be approved.”

The Catholic Action League called the Veterans Council statement “an act of courage, integrity and fidelity, not only to their religion, but to the legacy of John J. “Wacko” Hurley, the longtime Council Commander who fought for twenty-three years to preserve the traditional celebration of Saint Patrick’s Day in Boston.”

Hurley, represented by Attorney Chester Darling, won a 9 to 0 victory before the United States Supreme Court in Hurley v. Irish-American Gay, Lesbian, & Bisexual Group of Boston, upholding the right of parade organizers to control the content and message of the parade.

Catholic Action League Executive Director C. J. Doyle made the following comment: “The overt message of OUTVETS, affirming homosexuality as a source of pride, is radically discordant, indeed, irreconcilable, with a celebration honoring the Catholic Faith and a Catholic saint. Saint Patrick was not a proponent of homosexual rights. Those who preach tolerance and respect for diversity ought to learn to tolerate and respect the religious convictions, moral sensibilities and constitutional rights of Christians who believe in traditional morality.”

The Catholic Action League, and its predecessor organization, have supported the legal position of the Allied War Veterans Council since 1992.

HOMOSEXUAL GROUP TO MARCH IN

MARCH 8, 2017  Last night, by a vote of 11 to 4, the Allied War Veterans Council of South Boston—the organizers of Boston’s Saint Patrick’s Day Parade—refused to permit the homosexual group OUTVETS to march in the 2017 parade, which will be held on Sunday, March 19th.

On February 15th, the Irish Echo newspaper reported that the two homosexual activist groups which marched in the 2015 and 2016 parades, Boston Pride and OUTVETS, had failed to apply for this year’s parade. Boston Pride issued a statement over the weekend citing “other priorities.” OUTVETS, an organization which had no corporate existence prior to Boston Mayor Marty Walsh’s decision to reopen the parade controversy in 2014, issued a statement today asserting that they “assumed” the veterans council vote was because of their LGBT status.

As of this afternoon, it remains unclear whether the vote by the veterans council represented a reaffirmation of their longstanding position to prevent groups who identified themselves by their sexual behavior from marching, or was simply a refusal based on process issues pertaining to filing deadlines for this year’s parade and rules violations relating to emblems in last year’s parade.

Catholic Action League Executive Director C. J. Doyle made the following comment: “Whatever the reason, a parade named in honor of a Catholic saint should never be used as a venue for those who despise and reject Catholic morality, and castigate such morality as bigotry, prejudice and homophobia. The venerable name of Saint Patrick should not be exploited and trivialized by those who have contempt for the Catholic Faith, and have no interest in the ancient Catholic culture and heritage of Ireland.”

“Mayor Walsh’s posturing about not allowing discrimination is gainsaid by a 9 to 0 United States Supreme Court decision, which upheld the right of parade organizers to control the message and content of their own parade, which the court found to be a constitutionally protected expression of free speech. Walsh’s vision of inclusion does not, evidently, apply to Catholics who believe in traditional morality.”

“The conduct of the Walsh administration in the parade controversy, which, reportedly, included threats to parade organizers to withhold city permits if the mayor’s political allies in the homosexual community were not allowed to march, bears a striking resemblance to a current prosecution by the U. S. Attorney’s Office of two indicted mayoral aides, who allegedly threatened to withhold city permits for a Boston music festival if organizers refused to hire the mayor’s allies in organized labor.”