The Empire is perched to strike back.

In an attempt to extinguish any conservative voice from the MassGOP governing board (The Republican State Committee), the MassGOP has acted, along with Gov. Charlie Baker to endorse up to 54 candidates of the 80-member board. In doing so, they ignore and alienate and try to kick off the board some of the hardest workers in the MassGOP, including the Tank the Automatic Gas Tax leaders including Mary Lamb, Steve Aylward, Chris Pinto, Jeff Bailey, and many others.

—PRAISES THEN, KICKS THEM IN THE FACE NOW THAT THEY’RE NOT NEEDED————

In a meeting celebrating the voter’s rejection of the automatic tax increase, Charlie Baker had previously praised these workers, noting that it was the gas tax on the ballot that tipped the scales in his favor, giving him a razor-close victory over his shrill opponent.

Now the MassGOP Establishment cabal are filling mailboxes around the state with letter and campaign materials, estimated to cost in excess of $500,000, and may go higher, to PURGE the State Committee of any non-establishment hacks.

The disgraceful part of all this is that the Establishment has endorsed at least 16 people who work for Charlie or have been appointed directly by him, or are otherwise state employees, all not only beholden to their boss (and thus subject to incredible pressure to vote the establishment way), but also, under state law, CANNOT RAISE ANY FUNDS for Republicans. That’s a major part of their job.

SIMPLE EXAMPLE OF THE CHART SHOWN BELOW:

The establishment has endorsed a liberal Government Employee who cannot raise any funds by state law for Republican candidates, and who has a checkered voting history, and who was the moderator at the worst run Republican state convention in history, which resulted in a JUDGEMENT against the MassGOP, which was forced to pay $250,000 in damages to candidate Mark Fisher. (The MassGOP was accused of tampering with the vote, and refused to turn over the ballot tally sheets to the judge. The judge subsequently ordered payment of damages to Mark Fisher, for the stolen election.) 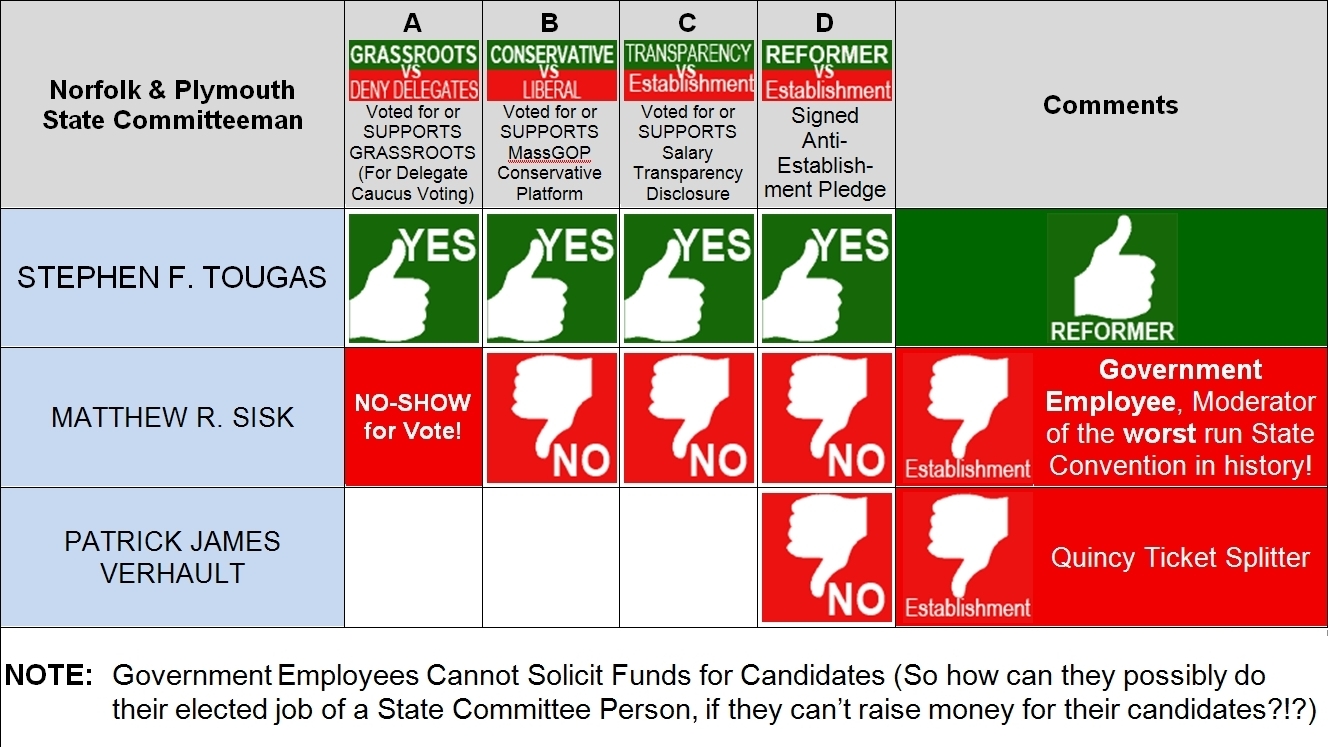 Broadside Clipping of one of the legal trial articles, featuring the judge, Ron Kaughfman, and Matt Sisk: 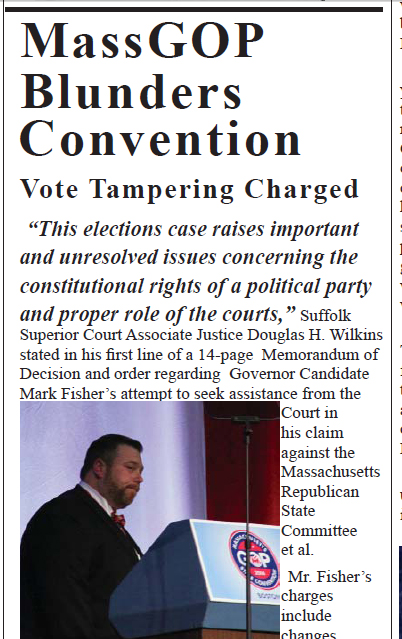 What’s it all about? Control of the MassGOP money.

Already, with this move, and with many of the controversial endorsements of political hacks over hardworking town committee chairmen and women, including Ruth Chou, people are echoing “Charlie is a lot like Scott Brown – pisses on his own voters, creates enemies where he doesn’t need to, like you think he’ll get re-elected?”

SEE THE CANDIDATES RATINGS AT:

We’ve re-printed the charts in our printed edition, but refer to www.VoteCoreValues.org for the latest updates.

Regarding the votes cited:

• A: A YES voted defended the current method of selecting

delegates to the national convention. A NO vote would allow the

party elites to choose their own delegates.

• B: Party platform vote to more closely match the national

platform, including noting that abortion is a tragedy, and that the

strongest, most natural family unit for raising a child includes both a

• C: Supports disclosure of Chairman’s salary prior to his/her
election.

The Donald and The Wall: A promise he could not keep

The Donald and The Wall: A promise he could not keep By Grace Vuoto In a chaotic and graceless manner, President Trump signed a $1.3 billion omnibus spending bill that Read More…

One Reply to “MassGOP vs. The Grassroots of the Republican Party”