I am running for Attorney General of the Commonwealth because we can do so much better than the left-wing political activist who is now occupying the office. At no time in the history of our state have we had such a liberal incumbent who has been an ideological extremist, who would ignore Public Safety, and trample the most basic Civil Rights of our citizens for mere political expediency.

We need someone who understands and respects our Founding Documents, and who has been dealing with the law for over 30 years as a trial lawyer and small businessman.

When you are considering which candidate you want as your next state Attorney General, I am asking you to please look at my experience, look at my passion I bring to the office, and look at who has the best handle on the important issues we face today.

Tackling the Opioid Crisis, fighting Corruption, protecting your Public Safety and saving your individual Civil Rights. Instead of this agenda, Maura Healey has made the AG’s office overly political to benefit her future political career – at your expense.

I will make you proud of me and proud of this independent, Constitutional Office. I ask for your support and VOTE on
Tuesday, September 4th in the Massachusetts Republican Primary. 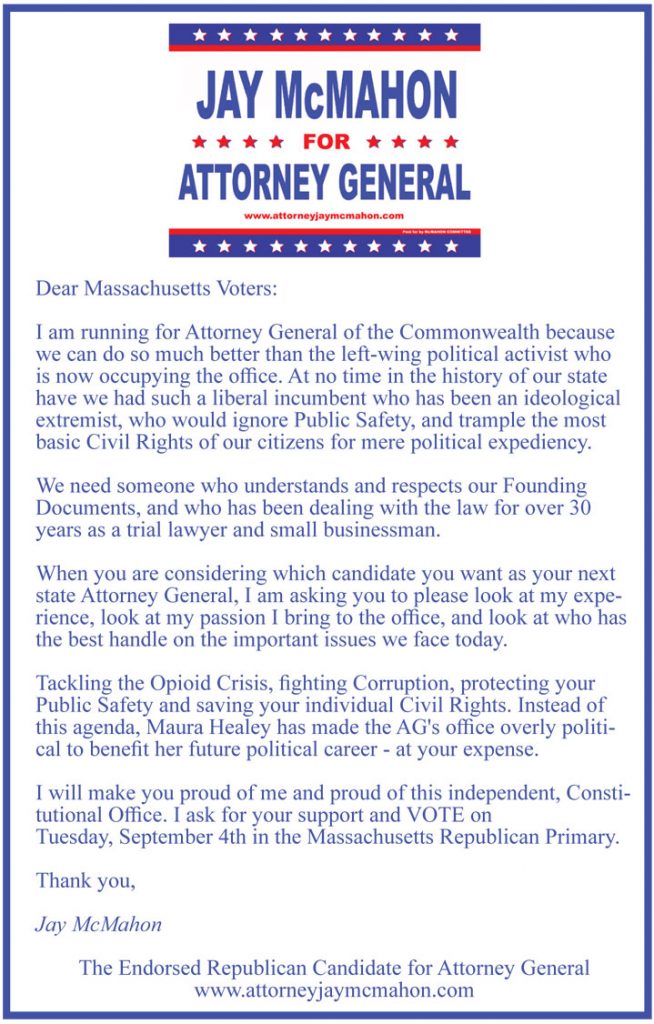 Why Should a Conservative Vote for Charlie Faker?

Adam Reilly does a great job, as always, balancing ideas from various folks. Our publisher, Lonnie Brennan, met briefly with Adam and shared some thoughts from our readers: sure, there’s Read More…

Political Patronage Patriots – Where does Your State Committee Man or Woman’s Allegiance Lie?

FROM OUR PRINTED FEB, 2020 EDITION: Political Patronage Patriots Where does Your State Committee Man or Woman’s Allegiance Lie? by John DiMascio On March 3rd, when most Republicans go to Read More…

What’s the Massachusetts Republican Party Chair Race Really All About? Not What you Think!

And Why Every Republican and Independent Should Care by Chanel Prunier Renew MA Coalition Executive Director, former National Committeewoman, Massachusetts Republican Party Over the past several months, even the past Read More…