Wednesday, June 5, 2019
Chanel Prunier – Chanel@RenewMACoalition.org
The Susan B. Anthony List, Renew Massachusetts Coalition, Massachusetts Family Institute and other pro-life individuals and organizations held a press conference today to announce the results of a recent poll regarding the provisions of the Roe Act Infanticide Bill.

Massachusetts voters conclusively reject the Roe Act provisions including eliminating parental consent laws relative to abortion and expanding late-term abortions. A copy of the executive summary report on the poll accompanies this release.

Sue Swayze Liebel, State Policy Director, Susan B. Anthony List, said “It is clearer than ever that Roe v. Wade is far from being settled law in the hearts and minds of the American people, and this is increasingly reflected in state legislatures. Across the nation there is growing momentum, informed by science and compassion, to reject the abortion extremism on display in New York and Virginia, and in Massachusetts’s Roe Act.”

“Massachusetts voters understand that our parental consent laws are designed to protect our young girls from exploitation, and to ensure their health and safety,” said Chanel Prunier, executive director of the Renew Massachusetts Coalition. “They also know that the Roe Act is outside the mainstream, particularly in its expansion of late term abortion. It should be rejected by the legislature.”

Andrew Beckwith, Massachusetts Family Institute, told attendees: “The so-called ROE Act would enable underage girls to get late-term abortions without their parents ever even knowing and allow abortionists to deny emergency care to full term babies.  We can now say with confidence that the voters of our Commonwealth reject this abortion extremism.  The legislature should as well.”

Myrna Maloney Flynn, Vice President of Massachusetts Citizens for Life, said, “”This poll did not survey members of the pro-life groups standing here today. It surveyed Massachusetts voters — citizens who are registered Democrats, Republicans, and Independents — voters of all party affiliations. They know women deserve better.”

“Martin Luther King, Jr. said that it is our moral responsibility to stand against unjust laws. S 1209 is one such law. And according to these recent poll results, the people of Massachusetts agree,” said Abigail Young of Students for Life. “If you are a student or young adult listening right now, I want you to know that your voice matters! Encourage your legislators to consider the stances of their constituents. Advocate for the rights of the preborn. Let women know that they are strong enough and supported enough to choose life for their babies.”

The Roe Act (SB 1209 and HB 3320) would radically expand abortion in Massachusetts by eliminating parental consent for underage girls to get an abortion, removing any meaningful justification for a late term abortion (after 24 weeks), and removing the provision that requires a baby born alive receive life-saving care. Polling conducted by Susan B Anthony list demonstrates that Massachusetts voters do not support this dramatic expansion of abortion and oppose the specific policy changes proposed by the Roe Act. 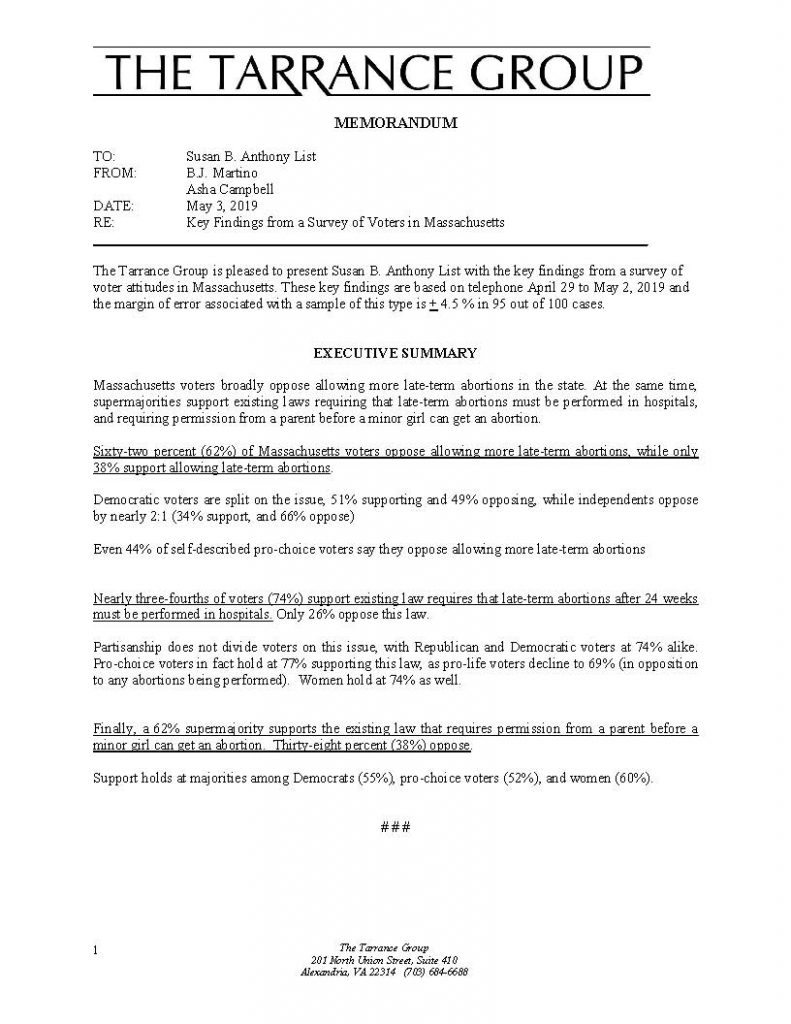 A Name Synonymous with the Mass. Republican Party … Larry Novak

A Name Synonymous with the Massachusetts Republican Party … Larry Novak FROM OUR JUNE 1, 2019 PRINTED EDITION by Lonnie Brennan I thought it would be interesting to catch up Read More…