The 2020 election was stolen, China hacked our election, and Dominion voting machines enabled the steal – that’s the message Mike Lindell and his teams of presenters and computer cyber experts delivered at a 3-Day Cyber Symposium held August 10-12. But instead of just saying it, they were intent on showing it, and for three days they did. 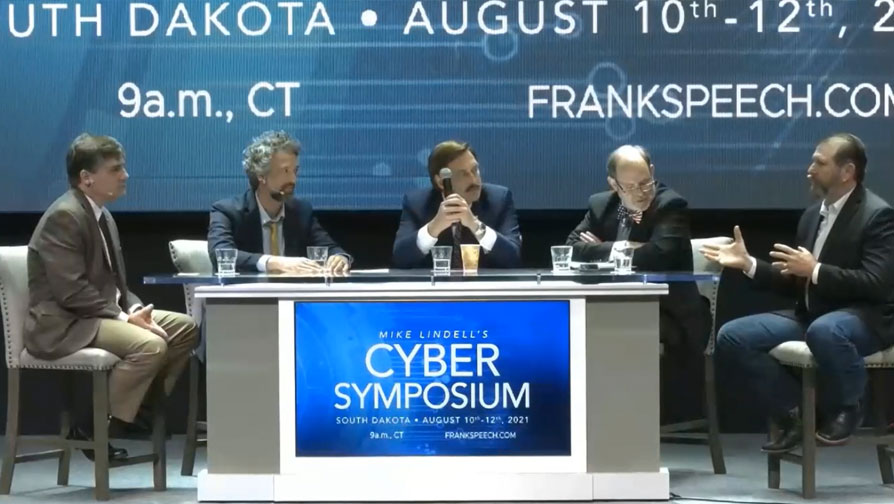 After what he explained had been more than five months of validating election data, Lindell – also known as “Mr. Pillow” – scheduled the symposium and offered a $5 million award to anyone who would attend the event and prove that the election data he presented was false.  He won’t have to shell out a dime.

“No one has tried to claim the $5 million dollar prize [offered] to anyone who could come and prove that this was not valid data from the 2020 election,” Lindell declared on his Lindell TV streaming platform. And his presenters explained in code, on computers, in graphs, in spreadsheets, and in other ways, repeatedly, that the data proved computer-based cheating.

The presenters live-streamed data and summaries they say proves that voting tabulations were altered, calculated, shifted, attacked with computer-generated patterns, irregularities, and software-algorithm-based alterations of vote tabulations;  in short, the election was hacked is how they termed it. 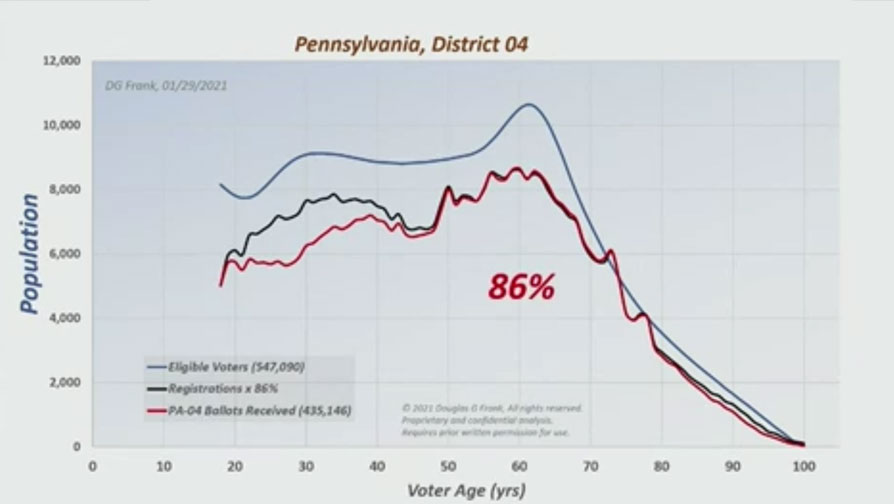 Videos of long segments of many of the lengthy, days-long presentations are being posted to www.FrankSpeech.com and wwww.LindellTV.com. In the presentations, Lindell and the participants of the symposium laid out everything in real-time.

We’ll be summarizing Captain Seth Keshel’s “Behind the Election Curtain” presentation in our next posting, in which he details 8 million nation-wide vote changes. We’ll also be summarizing Dr. Shiva Ayyadurai’s discussion of the steal in Massachusetts (where he won, paper ballots, where he lost, machines). 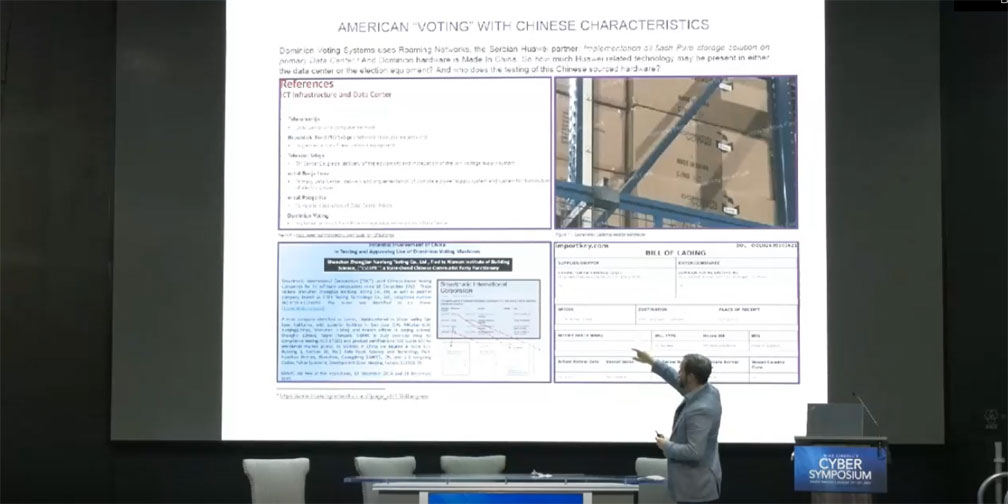 Voting Machines: Made in China – printed on shipping boxes, bills of laden, etc.

To be clear, this was not a slick, flashy presentation. Instead, it was raw, real discussions, by real people, going through real actions, and discussing data in real-time. And, they took their time to chat, and explain things in non-computer lingo, non-legal lingo. For example, during a particulary data-intense presentation, one presenter paused to offer another way to explain things: think for a moment, he said, that you came across a survey that showed that 10% of the people in your county had blonde hair. Then, imagine that you find out that that exact same percentage occurred in the next county, and the next. Then you find out that every county in your state had exactly 10% blondes. But, in the very adjacent state, the number is 13.4% blondes, in every county. Then you find in the another state, it’s 15.1% blondes, in every county. At some point, you’re looking at the map and saying, someone doesn’t look right here. 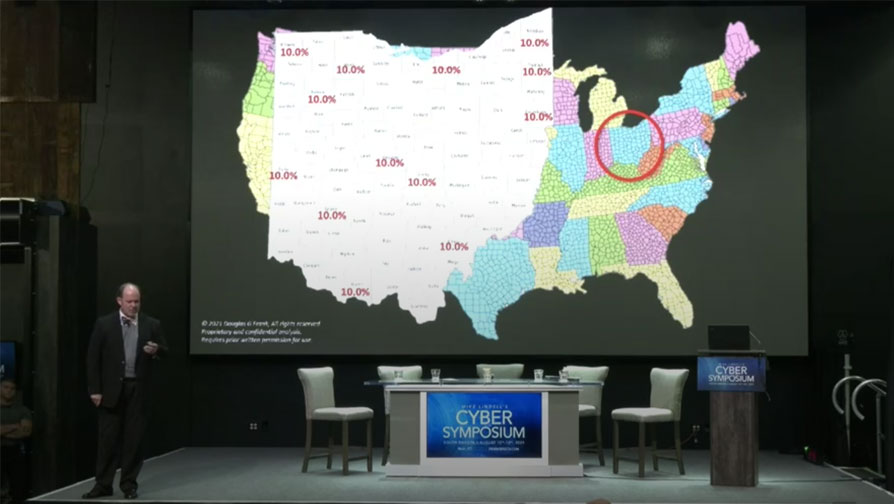 Dr. Frank pausing to show an analogy of how to view the data pattern irregularities.

He went on to show similar details of consistent vote shifting in each state, and explained how he could, once he analyzed the numeric data in one county, project the outcome of an entire state. And his mathematical spreadsheet projections each nearly-exactly tracked with reported data. This was just one of a series of data discussions. Others showed spikes for candidate Joe Biden occurring simultaneously, all in the middle of the night, in multiple states, all of relatable magnitudes, and all synced with what they stated were online data breaches, uploads/downloads transmission into the Domain computer voting systems.

Presenters focused on cyber attacks, but did touch upon various other forms of voting fraud, but the lion’s share was in the electronic hacking, Lindell and others explained. 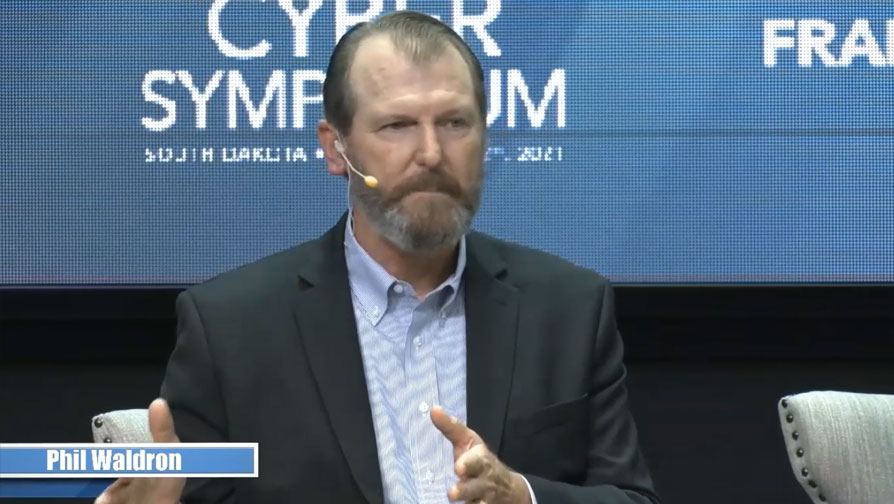 Machines, Data, Financing behind the steal – videos and discussions by Phil Waldron

“Donald Trump won the 2020 election in a landslide,” Lindell explained as he walked through the reported numbers for each state, and what he said were the real numbers for each state and what his cyber experts backed up.  Even in states where Trump won, such as Texas, the machines had altered the voting results to make the election appear closer than it actually was, Lindell explained with his experts. 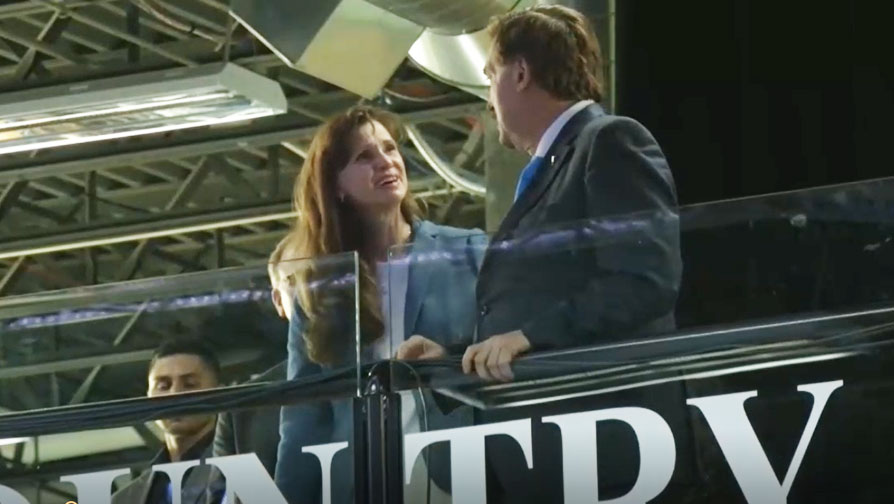 Lindell also discussed how, for questioning the election data, Dominion has sued him for more than a billion dollars, as well as others who have spoken out.

On the first day of the symposium, Lindell shared the news that it had been announced online that Dominion had just sued One American News (OAN) and Newsmax for being present at the symposium to broadcast the event or portions of it. “

The end of free speech” Lindell said, as he shared news of the Dominion actions against OAN and Newsmax which he said is intended to silence any questioning of Dominion.  For their part in boycotting the event, Lindell called out FOX and FOX Business, saying “shame on them for not even reporting that this event is happening.” Fox, unlike other stations, refused to even run Lindell’s 60-second paid commercial advertising the event. Lindell cancelled all of his My Pillow ads from the network in response. He spent $50 million in ads on Fox in 2020, and had spent $19 million so far this year, as acknowledged by FOX.

Noted attorney Alan Dershowitz appeared twice during the event, including a long discussion via video about how during the symposium, a federal judge, after sitting on a lawsuit by Dominion against Lindell for a month, magically timed things to announce that the lawsuit could move forward. He and Lindell shared how Dominion is trying to shut down free speech and represent the greatest threat to the First Amendment, as the powerful mega-company can place untold financial and legal binds on anyone who speaks up against them.

In one jumble, several of Lindell’s guests were delayed in taking the stage as they had received news that their officers were being raided. “While I was only a plane to come see you kind folks,” Colorado’s Mesa County Clerk and Recorder Tina Peters explained “they provided a search warrant and raided my office.”  Peters explained that the out-of-control Colorado Secretary of State Jena Griswold waited until the election clerk whistleblower left the state, then executed a fishing expedition, shocking Peter’s staff.

In a similar manner, Lindell explained how the next night, another unnamed individual who attended the symposium had his house raided at 10:30 pm, with four little kids present, and all the electronics in the house were taken in the raid.  He’s waiting to find out more about the fishing expedition.

He explained at one point that if someone questioned the contents of his pillows, he would tear one open and say “here, this is what’s in it.” He said the same should be done with the elections: if there is nothing to hide, he asked why the Democrats continue to throw up roadblocks everywhere, and certain anti-Trump Republicans also, and refuse to allow real audits. “Why do you think they don’t want to allow access to machines in Arizona,” Lindell used an but one of many examples.

A video played at the event and re-run each evening also detailed the that despite being assured there were no modems to allow internet connectivity in the voting machines, there were indeed modems, and there were data streams and data logs which confirmed internet connections.  Lindell would like every machine to be forensically inspected, but Dominion, instead, he and others stated both before, during, and after the symposium, have been wiping discs clean of data and logs, and have been removing components from machines.

Lindell specifically called out certain elected officials, including Georgia’s Governor Brian Kemp who Lindell has said has been “disgusting” and “has been blocking stuff for months. Why would you do this to our country?”

He also called out Fox “for not doing anything: Tucker, Bongino, Hannity, Imgrahm.” He went on to call out individual prime-time host, saying how shameful it was that they are not covering the 2020 election fraud.

As for the Dominion machines, “we’ll never be free,” Lindell declared, “until we melt down these machines and make prison bars out of them.”

NOTE:   The Broadside will be presenting fact sheets and summaries of most presentations over the coming weeks, and our team is working on posting mini-videos of the various presentations (so readers will not need to watch 72 hours of videos, but get, instead, essentially the equivalent of “Cliff Notes” summaries/samples of the presentations. We expect to begin releasing them over the next several days.

UPDATED 11/27/2020 There are 351 communities in Massachusetts. Of these, 255 communities use voting machines linked to Dominion (controversy-linked) Software. There’s a lot of info on the net and in Read More…

WHAT THE BIG (DEMOCRAT-PROPAGANDA-MACHINE) MEDIA refuse to acknowledge: In all of President’s Trump rally, in all of his and his speaker’s statements, they urged peace. President’s Trump’s words to those Read More…