FROM OUR PRINTED AUGUST 2022 EDITION

The electricity in the room mounted as master of ceremonies Virginia “Ginny” Gardner opened the event with a welcome. Excitement was in the air.
You could hear a pin drop when Kevin McNamara sang the National Anthem. Nick Pasquarosa led the guests in the Pledge of Allegiance. Virginia Gardner gave the invocation which was followed by dinner.

Speakers included Dr. Dominic Amara, Ted Tripp, Margot Einstein, Geoff Diehl and keynote speaker Jeff Kuhner. Margot, a member of the Honor Roll Publisher’s Club, was honored with a cake for her 99th birthday and offered a toast of congratulations to the Boston Broadside. Commander of the Sons of the American Legion Post 440, Paul Pasquarosa, was recognized for being named Commander of the Year and was awarded a ceremonial gavel in appreciation by SON Members. A special guest at this event was “Rocky Kuhner.” Rocky could not wait for cake to be served, so he helped himself to the first “lick.”

For those who could not attend, the committee promises to do it again next year. Congratulations, cheers and salute to the Boston Broadside, THE PEOPLE’S PAPER. Here’s to continued success. ♦ 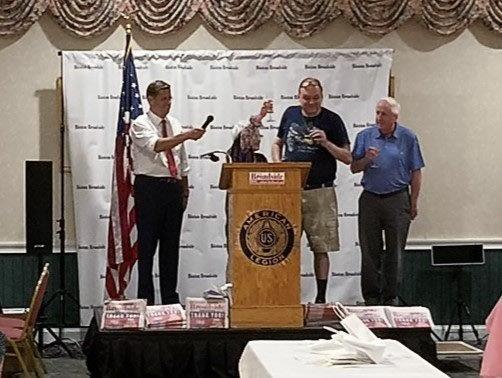 One of several cakes! 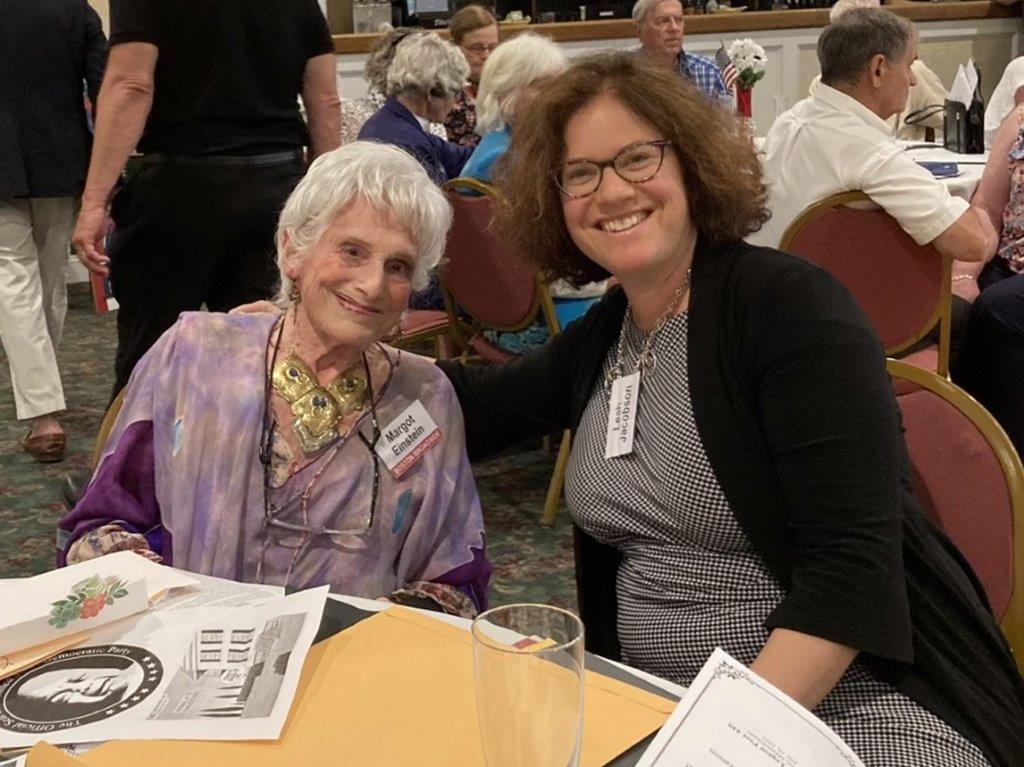 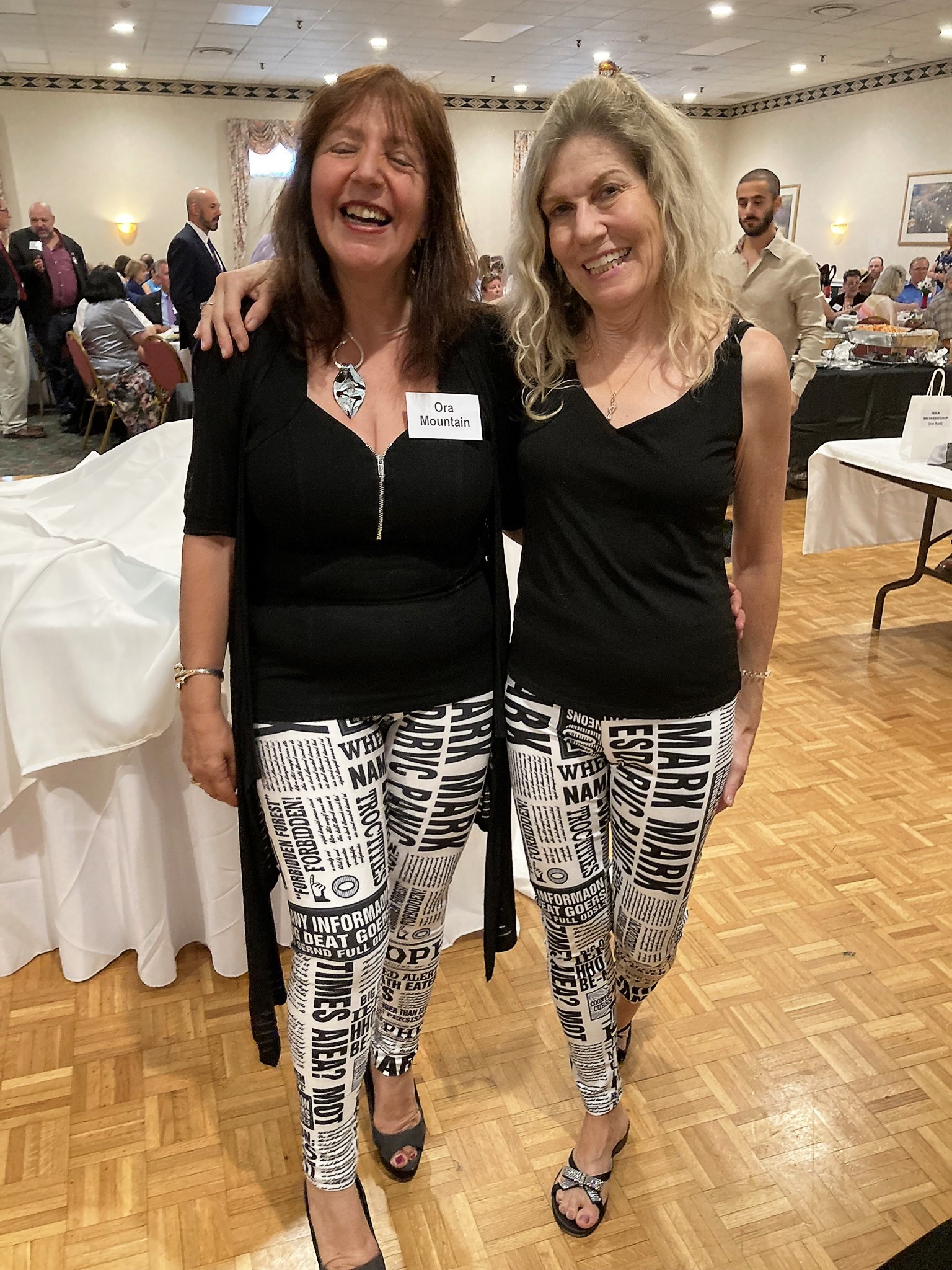 Ora Mountain and Sande Young kept the kitchen hopping, while they were decked out in newsprint leggings. 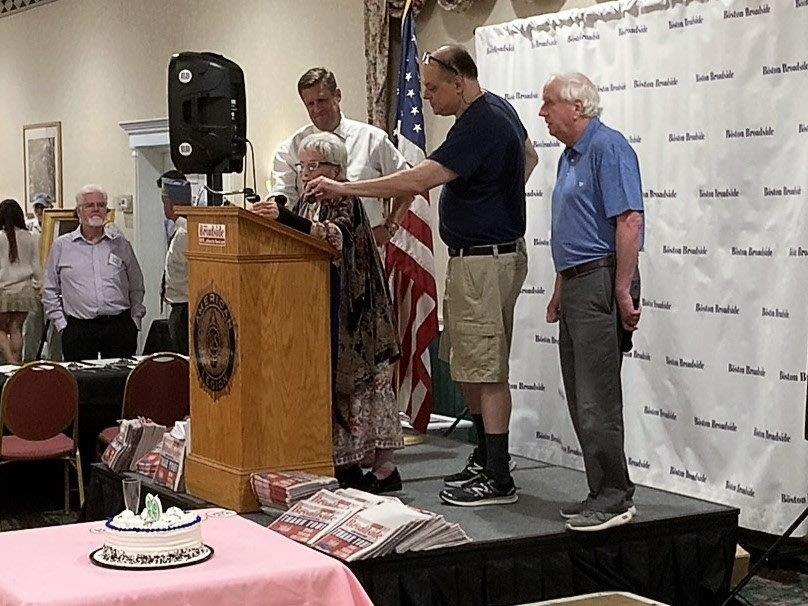 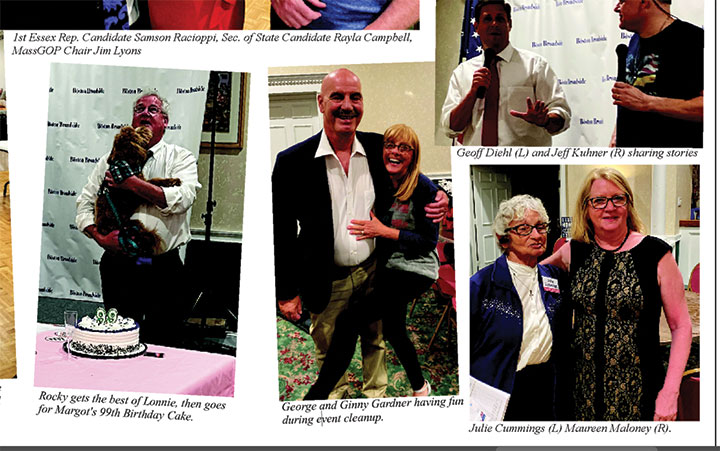 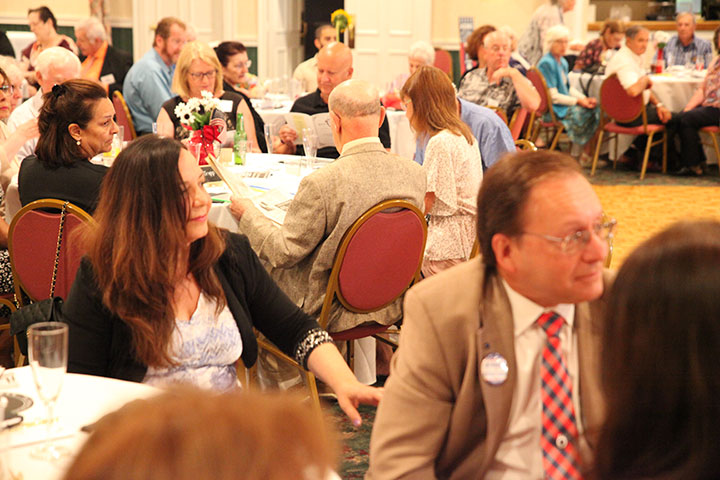 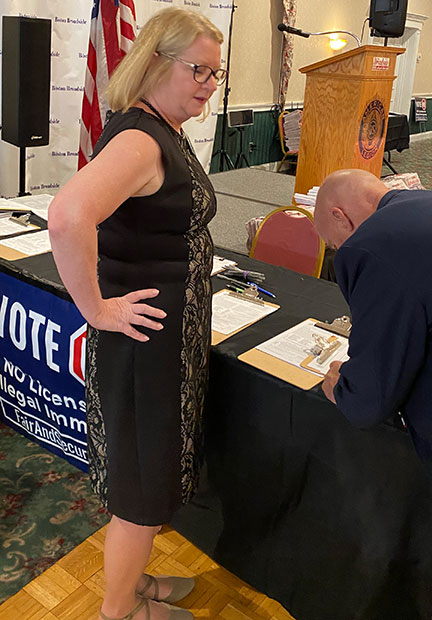 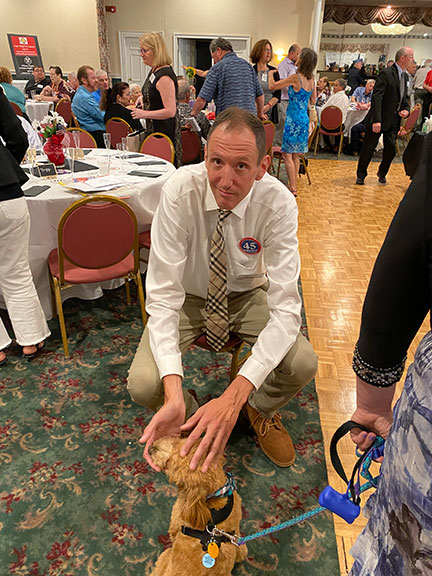 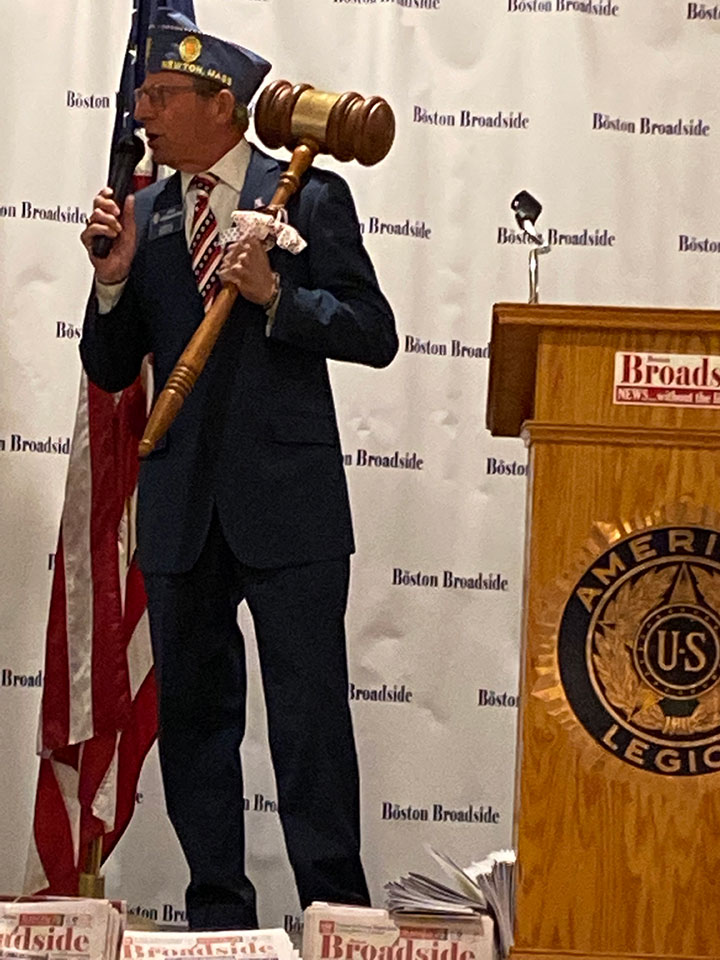 In a somber moment, Maureen Maloney relates the dangers of illegal aliens driving (her son was killed by an illegal alien driver.) 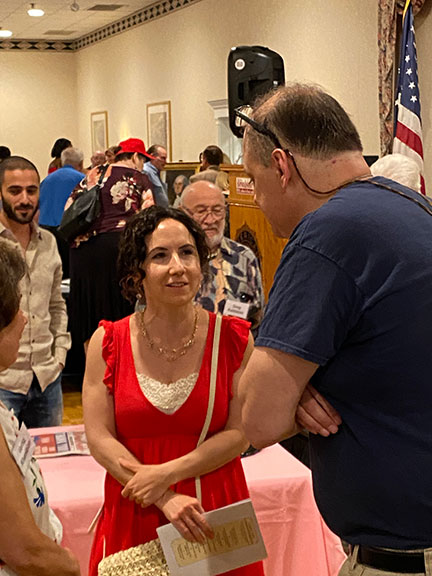 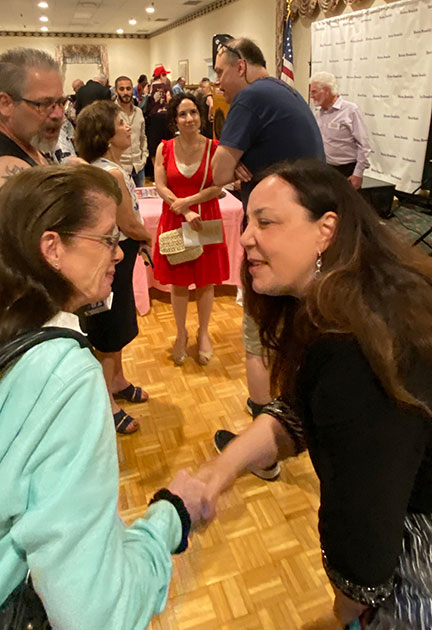 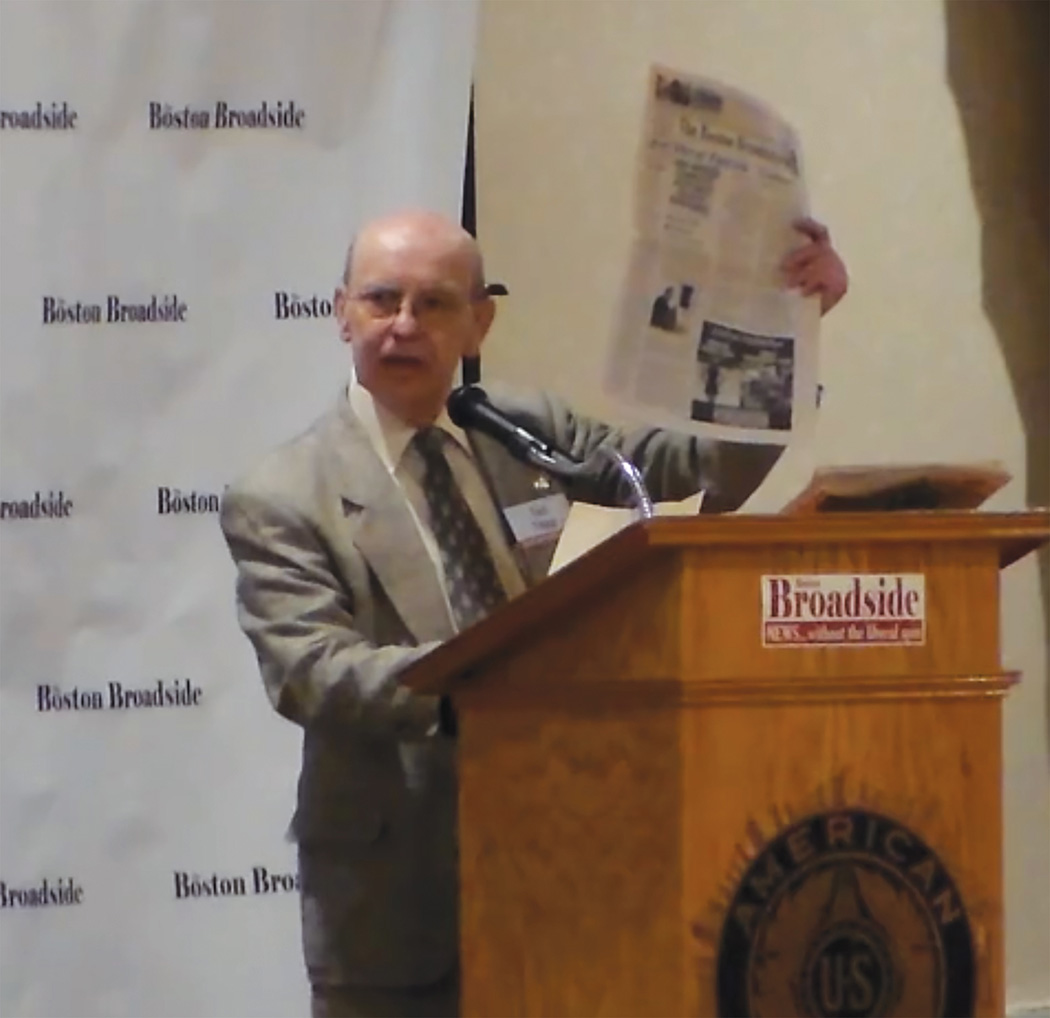 May 2021 Printed Boston Broadside – Coming to Stores and Mailboxes!

The May 2021 printed edition of the Boston Broadside consists of 36 printed pages of news, commentary, columns, advertisements, and photographs that are typically not seen by the most publications. Read More…

The January 2021 edition of the Boston Broadside is in the mail and headed to stores. The cover features President Donald J. Trump – America’s Man of the Year, Promises Read More…