and Accountability of the Lawyers 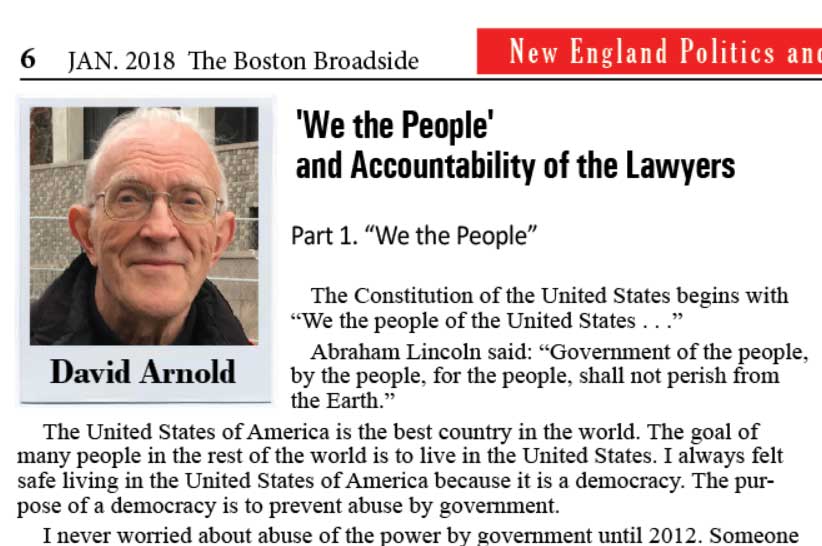 I never worried about abuse of the power by government until 2012. Someone I loved very dearly was subjected to abuse by a professional guardian appointed by the Probate Court. I was also subjected to abuse. In practice, there was no recourse to the power of the guardian. There were no checks and balances. There was no accountability.

People who have been victims of abuse by court-appointed guardians say this is not supposed to happen in a democracy like the United States. This kind of thing only happens in third-world dictatorships. But it does happen. I know. I was a victim.

I kept asking myself how this could happen in a democracy. That question would not go away. It remained unanswered for four years. In 2016, the answer finally came to me out of the blue. The Probate Court is not a democratic institution. It is a dictatorship (see the December 2017 issue #45 of The Boston Broadside, page 3).

Unfortunately, that is not the end of the trail. There is an underlying problem that makes it very difficult to fix the problems with guardianship.

The problem is not hidden. We all have the information needed to understand what is wrong. However, it took me a long time to see the truth that was lying in plain sight. Consider the following:

As the list above shows, the government of the United States is controlled almost entirely by lawyers, not ordinary people from all walks of life. Although the individual people may be different, the same entity – the legal profession – has total control of the Judiciary and the Legislature, and a lot of control over the Executive Branch.

Is our government really “of the people, by the people, for the people”? I guess it depends on how you define “people.”

Suppose we change one word in Lincoln’s famous statement so it reads: “Government of the lawyers, by the lawyers, for the lawyers shall not perish from the earth.” In my opinion, this is much closer to the truth.

We cannot blame the lawyers for controlling so much of our government. We the people elected them. If this is a problem, we have only ourselves to blame. It is not surprising that so many legislators are lawyers. Knowledge of the law is needed to draft good legislation. On the other side of the coin, the Legislature is supposed to represent the interests of ordinary people from all walks of life, not just lawyers.

The problems with guardianship center around misconduct by lawyers and judges. The problem I ran into is that lawyers seem to control all of the ways that one would file a complaint against the lawyers and judges who are guilty of these abuses. In my opinion, lawyers should disqualify themselves from handling complaints against their professional colleagues on the grounds of conflict of interest. Would there be anyone left if all lawyers disqualified themselves? I have described below what happened when complaints were filed.

There is nothing wrong with having lawyers in government service. However, the fact that lawyers have so much control over the whole government means that there has to be a good system of accountability for lawyers.

One of the organizations working to stop abuse of power by court-appointed guardians pointed out to me that the legal profession is entirely self-policing. This violates a universally accepted principle of law. No person can be his own judge. No profession or entity can be its own judge.

There are a number of problems with accountability of lawyers:

Lawyers are a special case because they control the court that is supposed to hold them accountable. The Constitution does not deal with the special case of lawyers. I do not find this surprising. About 60 percent of the delegates to the Constitutional Convention were lawyers.

In my opinion, it is possible to construct a reasonable, practical, effective system of accountability of lawyers:

A lawyer may not have the same goals as the client he represents. The practice of law is an occupation of common right. The legal system should be user friendly so people can represent themselves.

Self-policing violates a basic principle of law. It will not work in a culture that does not tolerate whistle blowers. Honest lawyers seem unable to defend themselves against dishonest members of their profession. Lawyers control most of the government. In order to have a true democracy, lawyers need to be accountable to We the People.  ♦