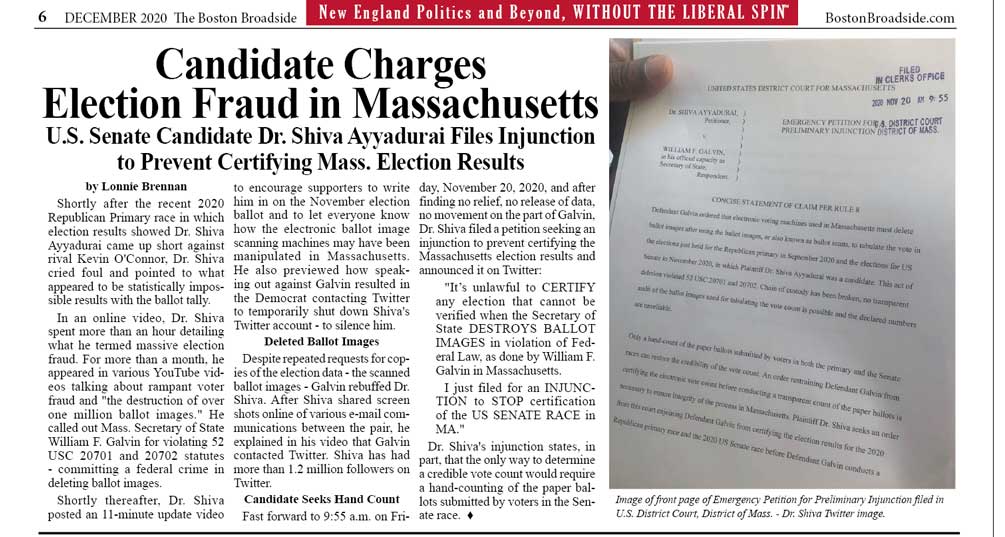 Shortly after the recent 2020 Republican Primary race in which election results showed Dr. Shiva Ayyadurai came up short against rival Kevin O’Connor, Dr. Shiva cried foul and pointed to what appeared to be statistically impossible results with the ballot tally.

In an online video, Dr. Shiva spent more than an hour detailing what he termed massive election fraud. For more than a month, he appeared in various YouTube videos talking about rampant voter fraud and “the destruction of over one million ballot images.” He called out Mass. Secretary of State William F. Galvin for violating 52 USC 20701 and 20702 statutes – committing a federal crime in deleting ballot images.

Shortly thereafter, Dr. Shiva posted an 11-minute update video to encourage supporters to write him in on the November election ballot and to let everyone know how the electronic ballot image scanning machines may have been manipulated in Massachusetts. He also previewed how speaking out against Galvin resulted in the Democrat contacting Twitter to temporarily shut down Shiva’s Twitter account – to silence him.

Despite repeated requests for copies of the election data – the scanned ballot images – Galvin rebuffed Dr. Shiva. After Shiva shared screen shots online of various e-mail communications between the pair, he explained in his video that Galvin contacted Twitter. Shiva has had more than 1.2 million followers on Twitter.

Fast forward to 9:55 a.m. on Friday, November 20, 2020, and after finding no relief, no release of data, no movement on the part of Galvin, Dr. Shiva filed a petition seeking an injunction to prevent certifying the Massachusetts election results and announced it on Twitter:

“It’s unlawful to CERTIFY any election that cannot
be verified when the Secretary of State DESTROYS BALLOT IMAGES in violation of Federal Law, as done by William F. Galvin in Massachusetts.

I just filed for an INJUNCTION to STOP certification of
the US SENATE RACE in MA.”

Dr. Shiva’s injunction states, in part, that the only way to determine a credible vote count would require a hand-counting of the paper ballots submitted by voters in the Senate race.  ♦