According to Dr. Hal Rizvi, whose 14-year-old daughter Anna was taken from the Cambridge Eating Disorders Center and sent to a psychiatric ward in Switzerland seven months ago when he refused involuntary commitment of the girl and a prescription of 10 mg of the dangerous antipsychotic Zyprexa, his daughter is now hospitalized for “falling” out of a 25-foot-high window.

Rizvi emailed me that the injury occurred May 13th and Anna’s injuries are as follows: “major chest [and] pelvic trauma, minor spinal, abdominal, [and] head injuries. [And] multiple complex fractures [in her right] arm.” The window was at Anna’s mother’s Swiss home on a rare visit allowed for Mother’s Day, the father stated. Rizvi also communicated that Anna said she could not remember how she got injured. 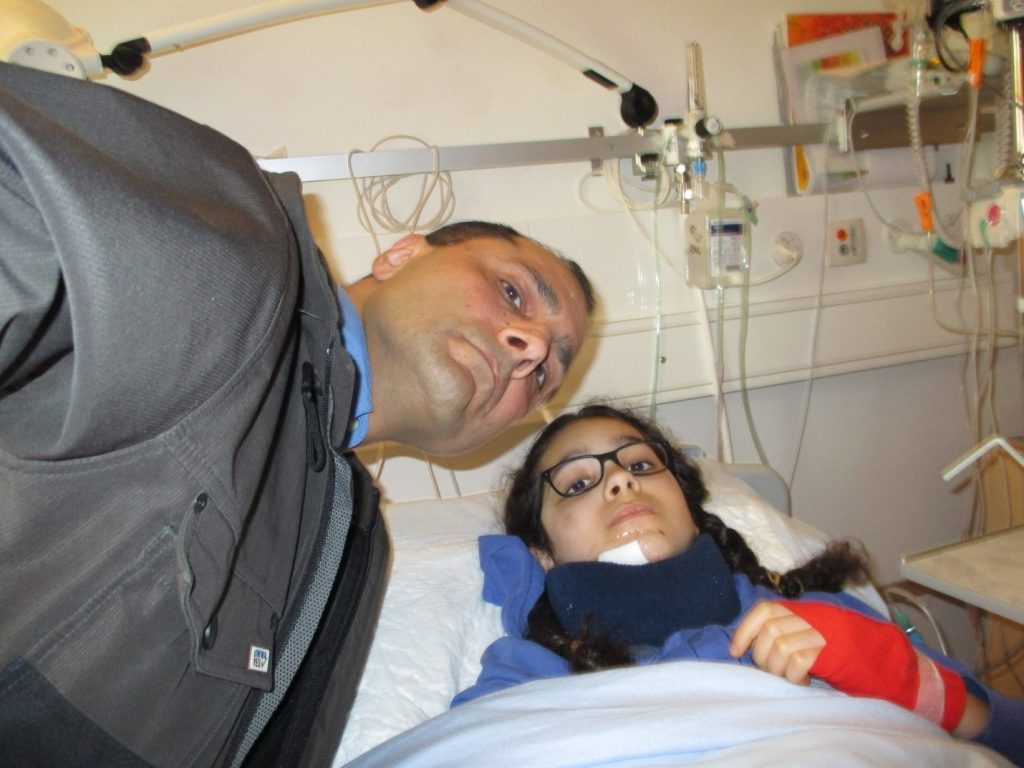 Per Rizvi, he was in Switzerland being restricted of visitation to his daughter on May 14th and the Swiss child protection agency, KESB, didn’t tell him that Anna was injured one day earlier until he returned to the U.S. Rizvi arranged a visit with his daughter in Ostschweizer Kinderspital [Eastern Switzerland Children’s Hospital] immediately after finding out about the injuries. This would be the first time he was allowed to see his daughter in seven months, which is when the DCF Massachusetts to Switzerland child abduction occurred. See earlier Taking of Anna stories in the Boston Broadside for more details. 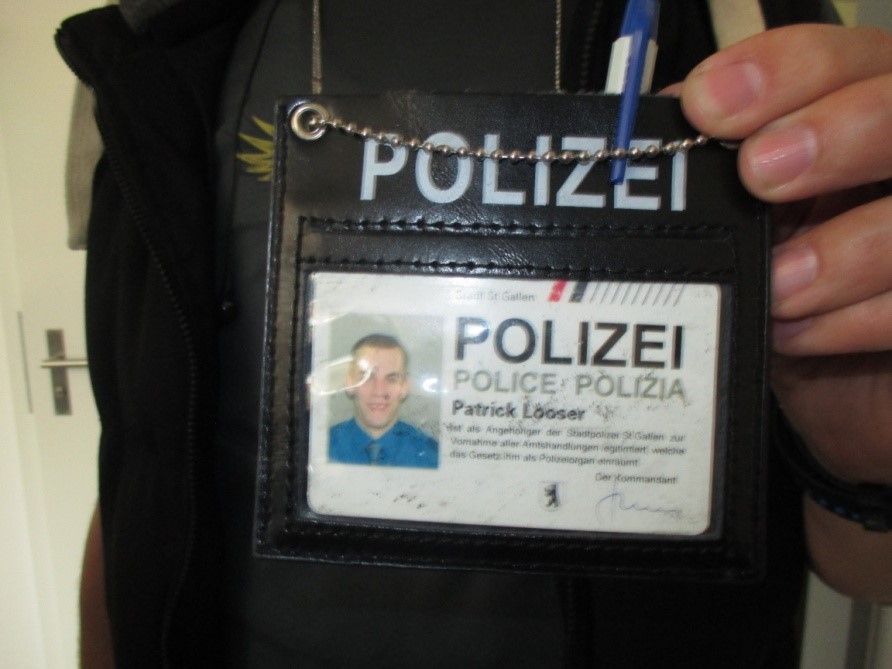 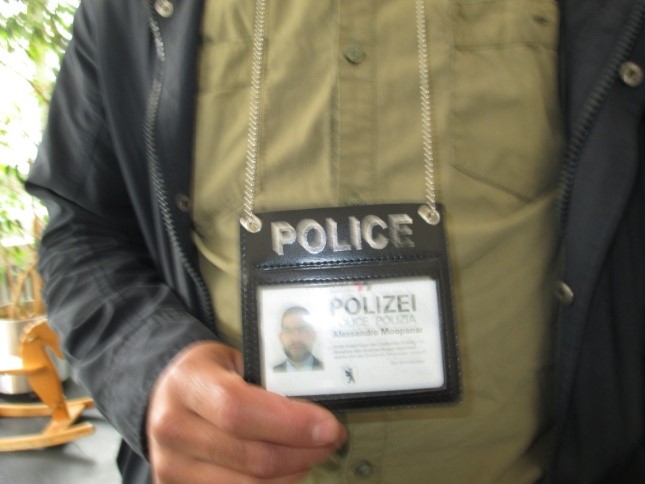 Dr. Rizvi says that his visit was only allowed for 1/2 hour, was supervised, monitored and communication was extremely restricted. Rizvi states that he was escorted to the hospital by KESB St. Gallen [city in Northeast Switzerland] Vice President and attorney, Rolph Braegger, and two police officers who body searched him first. Rizvi states that whenever he or Anna tried to give each other information, Braegger would stop them from communicating. Photos were also very restricted and Braegger didn’t allow for him or the police to be photographed. Rizvi said that the KESB St. Gallen vice-president was very concerned and unhappy about media coverage of the Rizvi case in the Boston Broadside. Braegger is now allowing Rizvi to fly all the way back to Switzerland for another one of these short, monitored and restricted visits full of intimidation by KESB and their police escort. Nice people.

Check that last sentence. While in the middle of writing this story, the situation worsened. Dr. Rizvi was informed that Anna was moved from the hospital back to the same psychiatric ward that has been harming her, Clienia-Littenheid, despite all of her injuries. This likely means that he will have no visitation rights to his daughter. Rizvi also stated that the Swiss courts are doing everything possible to block an emergency court hearing to cancel visitation restrictions imposed by KESB and to return custody of Anna to him. 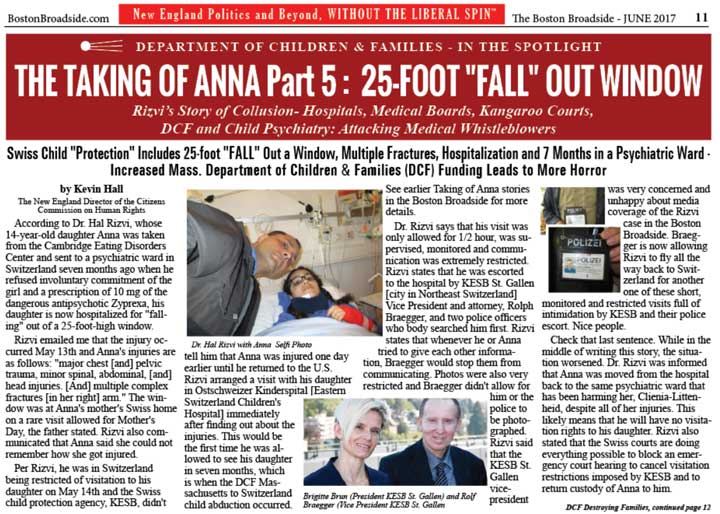 As a little message to KESB and DCF, advocates like me know that child protective services personnel regularly threaten parents who try to fight back for the rights and protection of their children. Parents frequently give in as they fear more harm to their children and a lessened chance of having their beloved children returned. This is why we gather all the information and records immediately and get written releases on the parental statements and documents. It allows us to continue to act and to push the story to larger media despite any alleged change of heart by the parents. So KESB and DCF Mass., as long as you keep custody of both Anna Rizvi and her older sister Miriam [held in the Swiss foster care system], we will have the means to keep expanding this story despite any threats.

“[W]e are starting a Swiss-wide initiative to break the power of the KESB. We have many cases on our desks…,” states Swiss activist, Paul Schuepbach, co-author of the book, 2013 – KESB Odyssey, The adult protection law and the system KESB. Schuepbach feels that abuse by KESB in cases like those of Anna and Miriam Rizvi are in extremely large number and that the KESB has nothing to do with child protection, but is a pure business model to maximize funding for the stakeholders that he and his co-author sister, Maria Schuepbach, expose in their book.

To ensure that DCF Mass. officials don’t get to fully hide from their corruption, nearby are photographs of DCF Mass. Commissioner Linda Spears and her boss and social worker, Marylou Sudders, who is also the former commissioner of the Massachusetts Department of Mental Health. Neither is working to slow down the massive drugging of foster children wherein several years ago, Massachusetts was drugging 39.1% of their foster children and are currently refusing to turn over updated information to me. 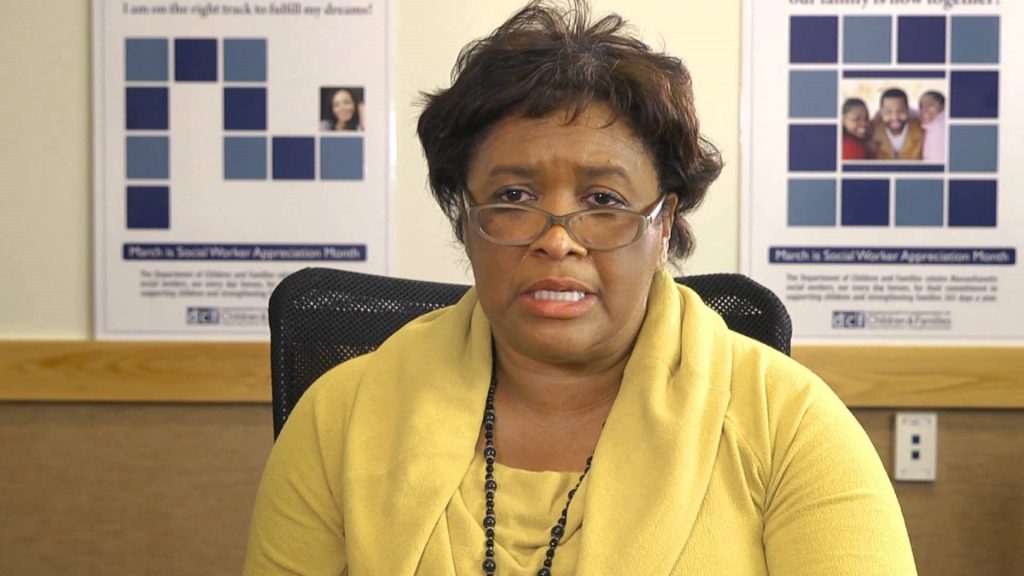 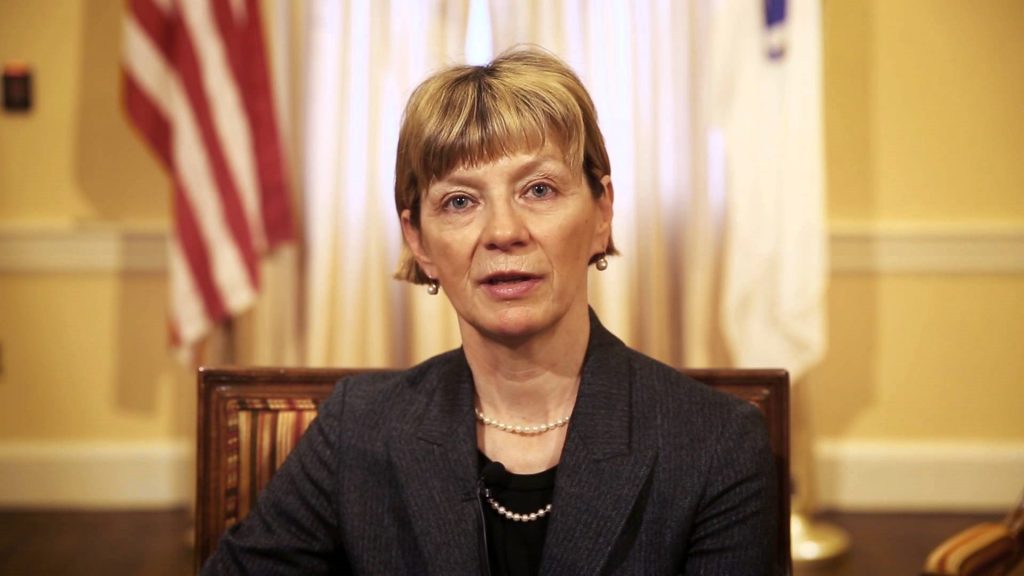 According to an article in Commonwealth Magazine in February 2016, then newly elected Governor Charlie Baker put forward a plan to greatly increase the DCF Mass. budget in order to add 600 new social workers who could pry their way into the lives of more families, often on anonymous reports. And yes, DCF Mass. also has a lot of federal funding incentives to take children, adopt them out and put children on dangerous psychotropic drugs. This is your tax dollars being wasted to harm defenseless children, so please speak up.

Contact the author at the New England Director of the Citizens Commission on Human Rights (www.cchrnewengland.org).

SPECIAL COMMENTARY: The race is on, and liberal (“Left of Obama on the social Issues” – his words) Republican Gov. Charlie Baker is estimated thus far to have served as Read More…

We’re pleased to announce our third major expansion, which will start to roll-out on Sept. 1st to bring The Boston Broadside to stores in more than 900 new locations West Read More…